Throughout his career, Chang Sung Jung has earned a reputation as one of the gamest fighters in MMA. Fondly known as ‘The Korean Zombie’ the 34 year old got back to winning ways at UFC Vegas 29 with win a decision victory over Dan Ige.

It took Ige just 22 seconds to knock out Gavin Tucker in his last outing, and he gave Jung a taste of his power in the first round, landing with some big right hands to the head and body. The Korean remained calm and methodical, picking his shots and staying behind his jab before scoring a takedown to edge a close opening stanza.

Jung connected right at the start of the second round to score the knockdown, but Ige bounced right back to his feet. The Korean Zombie began to load up with his punches and clocked his opponent on the jaw with a right hand.

Ige shot for the double leg but Jung stood up with ease. The American moved in with some power body shots and there was a clash of heads on the way in that left blood from a small cut above Jung’s eye.

The Pohang native dished out a heavy calf kick but Ige had a kimura attempt as the pair went to ground. Jung soon had his opponent’s back but ran out of time to lock in a choke. 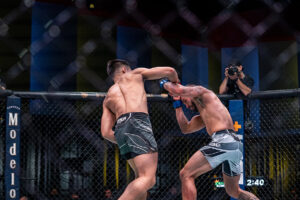 Jung took Ige down in the third and landed elbows from the top. From there he worked towards the back once more and looked for the rear-naked-choke as he locked in the body triangle. The American did well to fight the right hand and avoid succumbing to the submission attempt.

In the fourth round Ige landed a solid left-right hook to the body and a right hand to the head. He then swarmed in to land another left body hook. A solid right hand from Ige signaled more urgency from the Hawaiian. He followed up with an outside leg kick and a lovely counter right hand. A left hook followed.

But just as Ige might have sensed momentum swinging his way, Jung caught a body kick and slammed him to the canvas. He landed some good strikes and ended the round in side control. 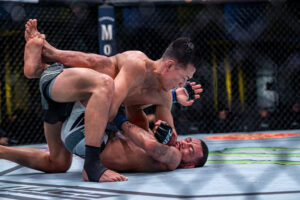 Jung continued to utilize the jab at the start of the final round. Ige sought to counter the threat of the takedown and connected with a left hook and a right hand to the body.

Then came a heavy right counter from Jung but Ige went for a takedown up against the cage and caught him with an upward reverse elbow. After eating another left hook to the body the Korean responded with a perfectly timed knee to the face.

The former WEC man took Ige’s back again and resumed the body lock. Despite being in a vulnerable position, Ige kept throwing punches and fighting the hands – but the class, control and experience of ‘The Korean Zombie’ throughout the fight meant that he was a clear winner with scorecards reading 49-46 (x 2) and 48-47. Jung was awarded his BJJ black belt in the Octagon immediately after the fight and this performance will have moved him one step closer to a second shot at the featherweight title. His record now stands at 17-6 while Ige slides to 15-4.

“In the fifth round I wanted to bring the submission. I do feel a bit upset about that,” he added.

"More than winning this fight, I love getting my black belt. This means so much to me."

Chan Sung Jung (@KoreanZombieMMA) discusses his victory over Dan Ige and how it felt earning his black belt.

Choi Seung Woo secured his first win via stoppage since 2017 as he knocked out Julian Erosa in the first round. The Korean was coming into the fight on the back of two consecutive victories having begun his UFC career with back-to-back losses.

His opponent had gotten off to a ferocious start to his tenure in the octagon putting together a pair of impressive finishes but Choi was a national Muay Thai champion in Korea and proved a different beast. His striking looking razor sharp from the outset.

Erosa opened up with a low kick to right hand but Choi’s speed was notable from the outset. The Korean fired off some lightning-fast right and left hooks, and it wasn’t long before he had his opponent lying flat on the canvas.

The 28 year old let fly with a one-two combination with the left hand cracking Erosa on the chin and leaving him horizontal. It took Choi just 1.37 to secure the victory in what was his most impressive showing since joining the promotion in 2019. His record extends to 10-3. Erosa slips to 25-9.

It was a disappointing night for Kanako Murata as she lost to a fellow former Invicta strawweight champion, Virna Jandiroba.

The Brazilian showed off the power in her hands in the first round. Then, having jumped into guard, the 33 year old went for the armbar. When she realised she didn’t have it she moved for a triangle before going for the arm once more.

Murata survived but the damage to her arm would be telling. After the Doctor inspected the arm between rounds, the Japanese fighter was deemed unfit to continue and was left in tears. With that TKO loss, her eight-fight winning streak comes to an end and her record slips to 12-2. Jandiroba climbs to 17-2. 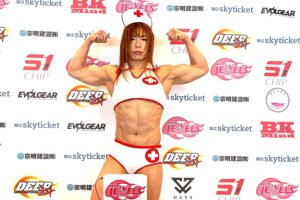