Jarred Brooks might not have managed to cut off Lito Adiwang‘s mullet but he did succeed in submitting the Filipino with an arm triangle choke. The American found the finish midway through the second round in the main event of ONE: ‘NextGen’ Part III.

Brooks scored his first takedown at the start of the opening round. He picked Adiwang up and slammed him down a second time for good measure.

The American was looking to soften up his opponent with short elbows but with around a minute remaining Adiwang got to his feet. He unbalanced Brooks with a push kick and landed a quick punching combination. 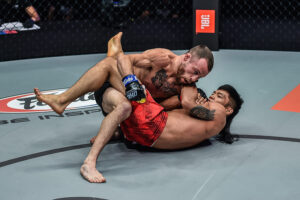 He needed less than 30 seconds to get Adwiang down to the ground. Again the Filipino was able to get to his feet but this time Brooks jumped guard looking for a guillotine.

He got his feet back on the ground and landed some knees. The action was paused due to a low blow by Adiwang and no sooner had it restarted than Brooks had scored his second takedown of the round.

He moved from mount into side control and locked in a head and arm choke. The tap came at the 3:05 mark and sparked a wild celebration from the American.

He improves to 17-2 while Adiwang drops to 13-4. Brooks looks set to be a serious contender in the strawweight division and will crack the top five with this win. 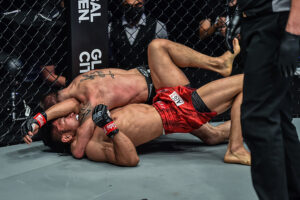 Earlier in the night Alex Silva (11-6) submitted Rene Catalan (6-5-0-1) in the opening round of their strawweight rematch. The Brazilian locked in an armbar from off his back with the tap coming at the 3:35 mark.