UFC 255 will see a pair of sisters compete on the same card for the first time in the promotion’s history.

Valentina Shevchenko will defend her flyweight title against Jennifer Maia in the co-main event. Meanwhile younger sister Antonina Shevchenko faces Ariane Lipski in another 125lbs matchup further down the card.

The pair normally prepare for their fights at Tiger Muay Thai in Phuket but have been unable to travel to Thailand due to the pandemic. Their preparation has also taken on a slight change in tone given that they both have to take care of business on the same night.

It is not a problem as far as Antonina is concerned,

“I am excited to fight together with my sister on the same card, same night,” she said. 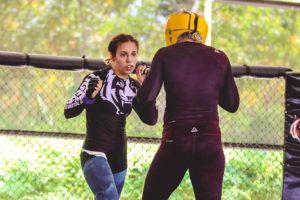 The younger of the two sisters says there are many benefits to having a sibling competing on the same card in the same weight category,

“It is different of course, because I’m taking care of myself and she’s taking care of herself. Of course, during the training camp, we support each other. Every day is together, running together, sparring together doing technique together. There are moments when some of us need support but now, closer to the fight, and especially on fight night, each one of us will just be taking care of their fight,” said the #15 ranked flyweight.

Antonina spent most of her career competing in Muay Thai where she won plenty of titles, but she only returned to MMA a few years ago. She comes into this fight on the back of a loss to Katlyn Chookagian and emphasized the importance of nurturing all disciplines.

“In MMA, a fighter should be good in everything.” She said. 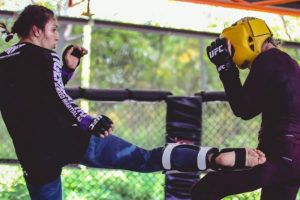 Antonina is 35 years old and only reached the UFC in 2018. Having arrived at the highest level relatively late in her career, she is keen to utilize her extensive martial arts experience and prove that she belongs with the best.

“I started to fight MMA in 2002 so it wasn’t like (just) now I transition to MMA. But there was a time when I fought just Muay Thai. I did come back in 2017 in MMA and now I’m here in the UFC. And I just want to do good at this time because I’m 2-2 in the UFC. I just want to prove to myself that I belong here.”

Lipski represents an interesting test for the older Shevchenko. The Brazilian is a former KSW champion and is also 2-2 in the UFC. Antonina says her opponent has many qualities,

“She’s a good opponent. She’s tough, aggressive, strong. She had two victories in her last fights but I’m fighting in the UFC and I don’t expect easy opponents here. That’s why I’m ready for the tough fights, I’ve had a good training camp and I’m just ready. I just need this victory this time, so all my focus is on my performance.” 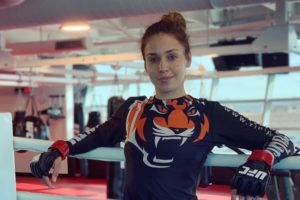 Antonina will be hoping UFC 255 will see a clean sweep for the Shevchenko family, and is supremely confident that her sister will successfully defend her title for a fourth time.

“Valentina will come back home with her belt,” she said.

“She is ready, she just had great preparation and she’s a very, very strong fighter. I know her opponent is tough. Everybody is tough, especially when you’re fighting for the UFC title, but Valentina is just another level.”