It wasn’t some vague longing for competition that lured the decorated grappling specialist back, he’s been scratching his competitive itches on the grappling circuit. Instead, DeBlass was coaxed out of retirement by an interest in fighting for one promotion specifically; ONE Championship.

DeBlass’ first brushes with the Singapore-based organization occurred when he traveled to Asia to corner ONE featherweight contender Garry Tonon for several of his fights. He was immediately impressed by what he saw.

“It’s very rare to have a good vibe at an MMA event,” the New Jersey native said.

“I’ve been to three or four ONE events. Every time I was there, it didn’t feel like a fight, it felt like an event. I really liked that.” 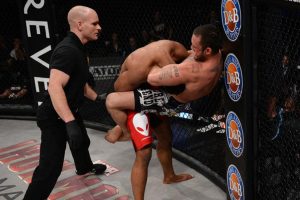 Over the course of the ONE shows DeBlass attended, he developed a friendship with the promotion’s CEO Chatri Sityodtong. Eventually the possibility of DeBlass fighting for the organization was broached, and it was too compelling a notion to pass up, particularly after weeks in lockdown due to the coronavirus pandemic.

“I’ve always admired the work that Chatri has done, his vision,” DeBlass said.

“We’re very similar in our beliefs, (although) I’m a little rougher around the edges than him.

“He reached out to me, and he said ‘Hey, how do you feel about coming back?’ And you know, this quarantine has lit a fire inside of me that I didn’t know existed still. When he said that to me, it felt like God’s plan. I couldn’t let the opportunity pass.”

DeBlass has not competed in MMA since 2013, when he picked up an impressive first-round knockout over Jason Lambert in the Bellator cage. Despite the length of his hiatus, he’s so far been pleased with the progress he’s made getting back into fight shape.

“When I started hitting pads and hitting the bag again, it came back to me quicker than I thought it would,” he said. “I talked to my boxing coach Frank Savannah and he’s like ‘you still got it.’ Not only do I think I still got it, I think I got it better than I did before because my training is going to be smarter.”

DeBlass is planning on competing at heavyweight for ONE Championship. Despite being relatively short for that division he is confident he will be competitive,

“I think I move very well for a heavyweight,” he said. 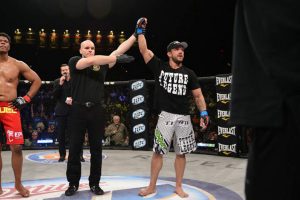 In his statement announcing DeBlass’ move to ONE, Chatri expressed his optimism that the American can make a title run at heavyweight.

DeBlass shares that optimism, but is content to take things slow,

“I respect everyone (in the ONE heavyweight division),” he said.

“I’m not looking to come to their show and challenge anybody and trash talk. They’re all fighters and are all professionals, and if they’re in ONE, they’re all talented. I want to get my feet wet. I want to test ONE, I want to test myself. Then, after a fight or two, maybe we could sit down and say, ‘hey, what does it look like to have Brandon Vera versus Tom’. I don’t want to get ahead of myself.” 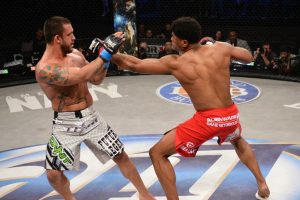 As DeBlass suggests, the ONE heavyweight division’s apex predator is currently Brandon Vera. DeBlass is impressed with the champion’s game, and would welcome a fight with him down the road.

“He’s a very talented fighter,” DeBlass said of Vera. “I know he has a solid jiu-jitsu, solid striking. I don’t see many weaknesses in him, so I would really have to study him and have my coaches study him to pick out any weaknesses that he may have and exploit them if we ever have the opportunity to share the cage together.”

For the moment, DeBlass’ focus is on getting himself back into tip-top shape, and making a splash in his first ONE bout. He can already envision that debut,

“I’m gonna feel like I’m exactly where I’m supposed to be,” he said.

“I’ve been under the bright lights for a long time. I’ve competed in the biggest events in the world, both in grappling and MMA. There are no surprises to me. I stood in the ONE arena before, and I had imagined myself as a competitor. It doesn’t bring me nerves. It brings me happiness. It brings me a sense of serenity.

“I really enjoy it because I know win, lose or draw, I’m going to compete with fire.” 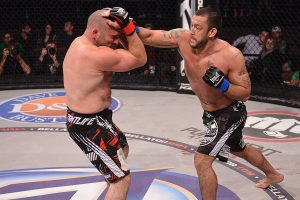 Once that first ONE bout is out of the way, DeBlass is content to continue competing as long as it feels right to do so. Even at 38, he’s not imposing any deadlines on himself.

“It’s wide open,” he said of his fighting future. “I don’t have a timeline.”

“I’m just looking to stay in the moment—each moment. I’m looking to focus on the training day itself, focus on the preparation. Right now, I’m excited to hit pads tomorrow. I don’t know where I’ll end up. I know where I’m trying to go, and that is, of course, to be the best version of myself I can be. I do believe the best version of me is a very dangerous man, dangerous but very loving. I just really hope to showcase my true talents and touch some lives while I’m doing so.”