Tomo Maesawa remained as the atomweight champion after Deep-Jewels 26, but the first defense of her belt was far from straightforward.

The 31-year-old from Aomori, Japan had to battle hard to get her hand raised after she was pushed onto the back foot in the early going of the rematch against longtime rival Emi Tomimatsu.

Though she was tested over three hard rounds by her compatriot, Maesawa summoned up the grit and determination of a true champion to prevail at the Korakuen Hall. It began as a battle of striking styles between the two in the first round. Tomimatsu established her jabs and consistently darted with combinations of knees and kicks to overwhelm her adversary.

In the final minute of the opening salvo, Maesawa scored a slick takedown and then quickly salvaged a back control for a rear-naked choke attempt.

Unfortunately for her, Tomimatsu scrambled free and finished the round with punches to the body while in a clinch.

Tomimatsu continued to have the upper hand early in the second frame, but Maesawa punched her way into a clinch and attempted a standing kimura lock. 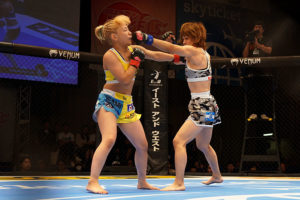 As Tomimatsu countered by taking her foeâ€™s back, they inadvertently crashed to the canvas. But Maesawa secured top control within seconds and landed hard elbows.

In an ensuing battle for leverage on the ground, Maesawa trapped Tomimatsu at the bottom, allowing her to end the round on a strong note by hammering a series of solid punches.

Maesawa upped her intensity in the third and final round, forcing Tomimatsu to backpedal by connecting clean, straight punches. She then tripped her opponent to the mat and kept her on the harsh receiving end of her lethal strikes.

When Tomimatsu got back to her feet, she desperately shot for a takedown that Maesawa effortlessly stuffed and punished her with hammerfists to the side of the head. Tomimatsu rolled to her back, and Maesawa capitalized on it by teeing off elbows from side control. In a last-ditch effort, she attempted to latch on a triangle choke that her counterpart easily escaped from.

Maesawa grabbed Tomimatsuâ€™s back as the latter tried to stand against the cage. She punctuated the final stanza by pinning her fellow Japanese while raining down stifling blows. In the co-headliner of the evening, UFC veteran Rin Nakai (22-2-1) scored her sixth-straight finish with a first-round armbar submission of Titapa Junsookplung (0-1).

Nakai was not originally slated to compete on the card, but she opted to take the fight on 24 hours’ notice as a replacement for Reina Miura who missed weight.

Kana Watanabe (8-0-1) also made short work of Hee Eun Kang (0-1), getting the job done in less than two minutes with a rear-naked choke.