Topnoi TigerMuayThai has long been hailed as having huge potential by his coaches. The 28-year-old put together an impressive six fight winning streak between 2016 and 2018 which included a devastating KO win on his Rizin debut.

The first stoppage win over Tadaaki Yamamoto at Rizin 11 really put Topnoi on the map. But it also put him in a position where he would have to face the best bantamweights on the Rizin roster.

He has not competed in over a year but this Friday Topnoi makes his eagerly-awaited return at UAE Warriors 13 against 17-9 Brazilian Issac Pimental. 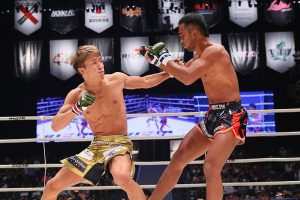 The opportunity arose unexpectedly but Topnoi says he was ready,

“I’ve been training all this time, I’ve been staying in shape throughout Covid. There was somebody else originally supposed to fight on that card but he got injured so they wanted somebody on short notice so, since I was already in shape and already training, it ended up being very convenient.”

His opponent is coming off of a TKO victory at UAE Warriors 10 and is a BJJ blackbelt. Things aren’t getting any easier for Topnoi in terms of the matches he is offered.

But he believes he is well prepared to deal with the challenge,

“The game plan has been up to the coaches, especially George Hickman. And what we’re really focusing on is staying on the outside, keeping it on the feet, working on takedown defense. So as long as it doesn’t get to the ground, that’s where our advantage is.” Hickman has high hopes for Topnoi and has been full of praise for his improved work ethic over the last year. The Thai agrees that he is now more motivated than ever,

“My past losses have definitely motivated me and so I’ve definitely been more focused and putting in the hours. As for what I want out of this fight, well everybody wants to win so there’s that aspect of it, and it’s also a good opportunity for my career. I want to fight the tougher opponents, to put my name out there,  to get on the biggest stage.”

Topnoi feels that he has improved dramatically since his fight with Asakura and would relish the opportunity to rematch the Rizin bantamweight champion,

“I’m definitely still thinking about that rematch with Asakura. I got that fight on short notice and at that point in time it wasn’t as easy for me to take things like that on short notice without a game plan because my skill level at grappling was still fairly limited, so I wasn’t as well-rounded as I am now. I definitely want that rematch and I’m totally open to more fights with Rizin and I’m in a better position to take those fights than I’ve ever been.” 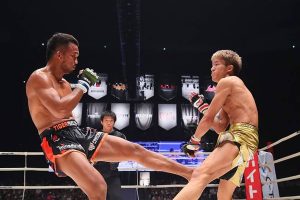 “I’ve got UFC ambitions. I think me and Loma can make it really high up and I think we are both capable of becoming champions at some point in our career. One person in particular that I’ve been watching and that I’ve enjoyed seeing fighting is Cody Garbrandt. I think that’s a fight that’s winnable for me. I really want that one and so I’ve kind of set that as a possible target to aim for within the UFC.”

Topnoi’s interest in Garbrandt stems from personal experience. He saw the former UFC 135lbs champion training at Tiger Muay Thai and the Thai believes the American deliberately gave him a wide berth,

“He’s been here but we’ve never sparred together as Cody was a bit intimidated by how I was sparring so he sort of avoided me and chose other sparring partners while he was here.”

Rizin is up and running with fight cards taking place every month. But fighters from outside of Japan cannot currently compete due to travel restrictions.

Topnoi says he is still contracted to Rizin and he is hoping to fight on New Year’s Eve,

“I still have a contract but due to the travel restrictions I haven’t been able to travel to Japan. They’re looking at having something available by the end of the year but it’s definitely still a discussion and it’s still on the table. I’m very interested in getting on that New Year’s Eve card if possible.” 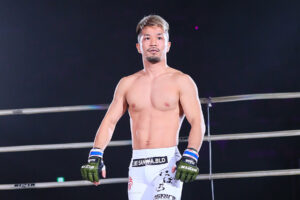 Oli Thompson out of UAE Warriors 13