Tsogookhuu Amarsanaa returned to the circle for the first time since November 2019 to beat the USA’s Ben Wilhelm via unanimous decision at ONE: ‘Full Blast’ Part II.

His last fight was a loss by technical decision against former champion, Eduard Folayang at ONE: ‘Clash of Legends’. But the Mongolian, who trains at Jackson Wink MMA in the States, was in eye-catching form here.

Wilhelm came into the fight with a perfect 4-0 record. He’d finished all four of them with a submission so it was a surprise that this encounter with Amarsanaa took place exclusively on the feet. As he marched towards his opponent, the American was met with a left right combination on the break, and it was a sign of things to come. Wilhelm caught a body kick and moved in for the clinch but this time he took a knee to the sternum for his trouble.

For all of Wilhelm’s aggression, Amarsanaa’s movement was impressive, and he was frequently able to land shots whilst on the back foot. The southpaw landed two body kicks, and soon followed up with a left hand.

Wilhelm came running after him, launching a wild roundhouse kick. But he was soon on the wrong end of another knee before eating a slick three-punch combination. 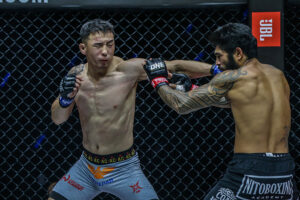 In the second round Wilhelm continued to advance with Amarsanaa circling on the outside. The 30-year-old landed a potent naked left hook. Once more, Wilhelm moved in to clinch but absorbed a hard elbow and a flurry of punches.

Amarsanna was flourishing and he turned up the aggression with a pair off uppercuts on the inside. Again, he was able to score doing damage from close quarters, a knee was followed by a bomb of a right cross.

Wilhelm’s durability was impressive, but the Hawaiian native was starting to look frustrated as Amarsanna caught him with a snapping right, straight away skipping backwards and out of range. In the third, Amarsanaa delivered four consecutive knees in the clinch before busting Wilhelm’s nose open with a left-right combination. Wilhelm kept stalking his opponent, with the Mongolian still content to evade and pick his shots.

Despite Wilhelm’s almost constant forward movement he couldn’t cut the cage off and it was Amarsanaa who looked in control of the fight with his ability to land the cleaner shots and with greater volume.

Wilhelm moved in for the clinch and got caught with another knee and a slick body-head combination. The Gracie Technics fighter found the target with a triple jab and a body kick late on, and with the clock running down, he could be heard saying, “you’re running!” to Amarsanaa as he threw a push kick.

The pair exchanged an explosive salvo as the fight drew to a close. It was a tough first showing from Wilhelm who tastes defeat for the first time and slips to 4-1. Amarsanaa could well cause problems for anyone in the lightweight division and appears to have gone up a level during his hiatus. His record now stands at 6-2. Yoon Chang Min’s four previous wins had come inside the distance and he maintained that record with a quick first round finish against Ma Jia Wen. The Korean produced an emphatic hip toss early on in the fight to leave Ma on his back.

He soon had his left arm locked under his opponent’s chin. There did not appear to be a clear tap from the Chinese fighter but with the choke sunk in tight the referee called a stop to the contest. Ma’s record drops to 6-4, while Yoon climbs to 5-1.