Amarsanaa Tsogookhuu has the chance to become one of the top contenders in ONE Championship’s talent-rich lightweight division if he can start to build a winning streak at ONE: ‘Masters Of Fate’ this Friday.

The 29-year-old Mongolian stalwart is riding high after scoring a huge win against a hometown hero in Shannon Wiratchai in Bangkok, Thailand this past February.

Almost every fan inside the packed venue cheered loudly for their countryman, but Tsogookhuu ultimately silenced the crowd and claimed the unanimous decision victory thanks to a fantastic all-around performance.

“It helped a lot in building my confidence because he came in with a lot of hype and support, and getting a win over him in front of his home crowd like that helps me boost my stock in the division,” he said.

“I understand that it doesn’t get any easier now as our opponents get stronger and stronger as I work my way up the division. I need to train even harder to get those wins,” Tsogookhuu added. 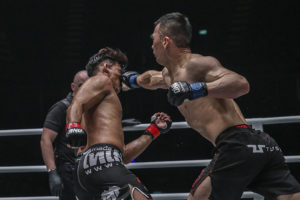 He will now face another local favorite when he competes in Manila, Philippines to duke it out with former lightweight champion Eduard Folayang at the 20,000-capacity Mall Of Asia Arena.

Even before he steps under the lights, Tsogookhuu admitted that he feels the weight of the challenge he will face as a raucous home crowd cheers their hero on.

“I still have the same feeling as when I faced Shannon Wiratchai. There’s a bit of pressure competing in front of a partisan crowd, but I need to win,” he explained.

However, Tsogookhuu has ways of coping with that mental burden. It gave him the strength to overcome every obstacle in Thailand, and he expects the same result this time around.

“The first thing that was running in my head was that I needed to win for my team and for my family,” he stated. “I also implored myself to have the confidence to stand in the middle of the ring and execute our game plans well.”

“When you’re inside the cage or ring, all that pressure really is drowned out by my competitive spirit, and I’m going all out,” Tsogookhuu continued. 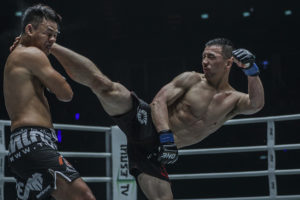 Sharing the cage with an athlete who has battled some of the world’s best and captured the sport’s greatest prize will make any fighter concerned about the tall order in front of them, but Tsogookhuu sees the brighter side of things.

According to the Mongolian warrior, he is focused on the rewards that he can reap if he can get his hand raised in triumph on Folayang’s home turf.

“It’s a great chance to test myself against the best, a former champion, and to see where I am as an athlete. Of course, I will do everything I can to beat him. Beating him will bring me glory and honor for sure. I see this as a big chance to prove myself,” he stated.

Despite his confidence of being able to bring down the Filipino MMA icon, Tsogookhuu recognizes that his opponent is a danger to anyone, especially with the support of his followers behind him.

“He is a very well-rounded athlete. Of course, home advantage should be counted as one of his strengths. He is good at defending takedowns and good at stand-up. He is also fast, which is one of his main strengths. His leg kicks are powerful. He is truly dangerous,” he conceded.

With his morale at an all-time high, Tsogookhuu is confident that he will emerge triumphant against Folayang and make sure that all the fans in the arena—and all over the Philippines—will know his name.

“I’ve been here for a few days, and I already love the Philippines. As much as I like the people here, I think I am going to send them home unhappy and disappointed. I think I do have what it takes to win. I’m not underestimating myself,” he vowed.