One of South Korea’s hottest mixed martial arts prospects is ready to take centre stage with the goal of carving a niche among the sport’s elites.

Unbeaten bantamweight Chang Ho Lee will get the chance to extend his winning streak and take another step forward in his professional career when he squares off with compatriot Sung Joo Hwang. That fight headlines Zeus FC 3 in Seoul this Saturday.

Lee is coming off an impressive TKO win over BJJ black belt Micael De Jesus at OWS 9. The 25-year-old standout is hoping to add another stoppage win to his record on Saturday,

“All things are affected by my preparation. I am training all elements of ground and stand-up game plans to win as fast as possible. I am trying to do my best in the first round, and if there is an opportunity to get an early stoppage, why not?” 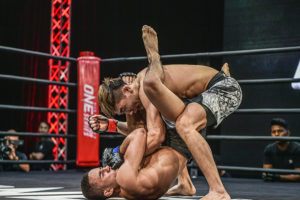 Lee holds a flawless 5-0 record. Not only does he speak with composure and poise but he performs that way too, making it easy to forget that he is still a relative newcomer to the sport.

Lee made his professional debut just two years ago so despite the growing hype around him he is not getting ahead of himself,

“The process is a long process. Some people try to rush it and make it fast. I just try to make myself better every day,” he said.

In his continual quest for improvement, the Korean rising star feels that he has to be reminded that there is always much to learn. Lee feels this relentless quest for growth is what separates champions from contenders,

“I always consider myself a bad fighter because that is what I was when I walked into the gym for the very first time. I am the biggest critic of my career. I have to keep working on my weaknesses in order to perform better,” he said. At the rate Lee is progressing being signed by a major promotion appears an inevitability. His bout at Zeus FC 3 could well prove to be the final step in that direction,

“I can fight anywhere in the world. ONE Championship, UFC, Road FC, Rizin, you name it. A win this weekend will put my name out there. My future in the sport is at stake. That’s why this fight is important,” he said.

Now that he turns his attention to Hwang, Lee is confident that he can employ a winning game plan to topple his countryman. But he wants to do it in the sort of style that will have matchmakers all over the world reaching out,

“I am more than ready for this fight. My team knows my opponent very well, so I know what to do when the bell rings. Watch out because this win can’t be a normal win.”