Wang Wenfeng will be making the first defence of his 61.5kgs title at Kunlun Fight 79. The show is set for the Taiyuan Sports Centre Stadium on December 15th and will also feature an eight man 66kgs tournament.

Wenfeng won the 61.5kgs tournament by beating three opponents in the space of a single night at Kunlun Fight 74, going the distance in every single stage. He will only be facing one fighter on December 15th; the champion has been matched with reigning Glory of Heroes bantamweight king Feng Liang.

Kunlun Fight 79 also features an eight man 66kgs tournament. The quarter finals, semi finals and final will all take place on December 15th. Among the eight participants is Wei Ninghui who has already enjoyed success fighting in this format, claiming the 65kgs tournament in 2016.

This will be the final event of the year for the Chinese kickboxing promotion. Kunlun Fight has put on 15 shows so far in 2018 with 13 taking place on the Chinese mainland and the other two being held in Macau and Khabarovsk.

Petchtanong Banchamek signs with ONE Championship 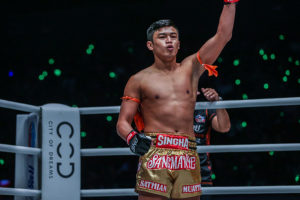 Sangmanee eyeing up Nong-O title fight ahead of ONE: ‘A New Tomorrow’