Barely a week has elapsed since her submission win at UFC Fight Night 141 but Weili Zhang has already been handed her next assignment. The Chinese strawweight will be back in action on March 2nd (local time) and will have to make a longer trip than she did last weekend in order to face Tecia Torres in Las Vegas.

Zhang (18-1) is riding an 18 fight winning streak which includes two UFC wins. She previously held strawweight titles with both Kunlun and Top FC and has been rewarded for her fine run of form with a spot on a marquee pay per view card at the T-Mobile Arena in Las Vegas.

It is a mark of how highly her current employers regard Zhang that they have made this strawweight fight the first addition to the UFC 235 card. Torres (10-3) is coming off back to back decision losses but both came at the hands of top ranked opponents and the American Top Team fighter is currently at #6.

This will not be Zhang’s first time fight in a big American arena. She made her UFC debut in August at the Staples Centre and scored a unanimous decision victory over Danielle Taylor, following that up with the submission victory over American Top Team’s Jessica Aguilar in Beijing last Saturday.

This fight represents a tremendous opportunity for Zhang. The unranked 29 year old has an opportunity to break into the top ten with a win and she will also be fighting in a 20,000 capacity arena that has played host to fights involving the likes of Floyd Mayweather and Canelo Alvarez. 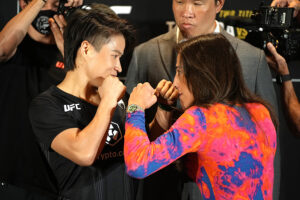