Weili Zhang sat down with The MMA Hour this week to discuss her rematch with Rose Namajunas at UFC 268. The former strawweight champion opened up about her experiences in the first fight.

Zhang lost her title when she was knocked out be Namajunas at UFC 261. She received a hostile reception from the crowd in Florida and holds her opponent responsible,

“I don’t think it’s a good thing to mix sport with politics but I think that was her plan. In the beginning I thought it was just trash talk and it didn’t affect me but, when I went out in the stadium and got booed, I think Rose wanted to make those comments so the audience would boo me.”

If it was all part of Namajunas’ game plan then it worked out very well for the newly crowned strawweight champion. She knocked Zhang out in under 90 seconds and it was a devastating defeat for the Chinese fighter,

“When I lost the fight I didn’t react very well because I felt that the fight didn’t even begin and I brought so many people here from China so to lose the fight in that way was not good. I felt very sad.”

Zhang feels that she should be making friends through her MMA career rather than enemies and was shocked by the reaction she received. She blames Namajunas for stoking up the Florida crowd,

“I think that those comments crossed the line because the audience and the fighters we all come together at UFC because we all share a passion for the sport of MMA. In my mind I am coming here to make friends because we all have the common love of martial arts.” 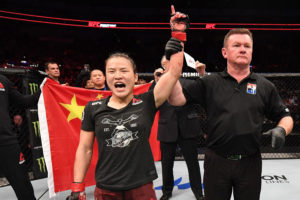 However Zhang acknowledged that she should be focusing on her own performance and ignoring the crowd,

There was some surprise when she was granted an immediate rematch. The two will fight for the second time on November 6th but Zhang feels that matchmakers made the right decision,

“I was no surprised, the audience wanted to see a rematch. A lot of people want to see a real fight between me nd Rose because last time the fight didn’t even start.”

Namajunas has yet to respond to these comments. With UFC 261 set for Madison Square Garden it will be interesting to see whether Zhang gets a similar reception from the more cosmopolitan New York crowd.