In front of a capacity crowd at the T-Mobile Arena both women stood toe-to-toe over the course of five rounds, exchanging strikes and not backing down in a bout that will go down as an all-time classic.

Each round was closely contested, but it was the power of Zhang that spelled the difference. The Chinese champion did significant damage with her straight right and left hook, forming a gruesome hematoma on Jedrzejczyk’s forehead and mangling her Polish opponent’s nose.

Through it all, Jedrzejczyk never backed down from the attacks as she landed plenty of offense of her own, often punctuating her combinations with kicks. 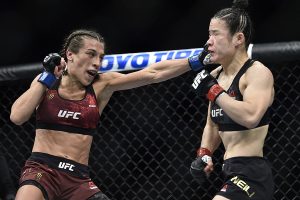 A hard right hand by Zhang seemed to hurt Jedrzejczyk in the second round. In the third, the Polish challenger switched to southpaw, which temporarily threw Zhang off.

Jedrzejczyk started to land her right hand with more consistency and turned the tables by placing Zhang’s back on the fence but the latter made necessary adjustments in the fourth and fifth stanzas.

A left hook by Zhang in the fourth round wobbled Jedrzejczyk for the second time in the match, and she continued to catch the Polish fighter with the left hook at the end of combinations.

As soon as the final horn sounded, the five-round championship clash was instantly being hailed as the greatest female bout in the promotion’s history. In the end, Zhang was declared the victor, retaining the UFC women’s strawweight title. 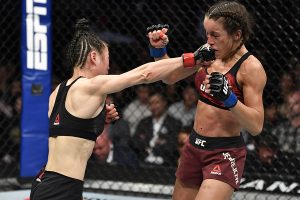 Judges Michael Bell and Derek Cleary scored the fight 48-47 in favor of Zhang, while Eric Colon had it 48-47 for Jedrzejczyk.

“I wasn’t really sure what the scorecards would say, but I got it. It was a great performance,” Zhang said through his translator after the fight.

“We are all martial artists here. We want to set an example for the kids. Thank you everyone,” she added.

With the rousing victory over Jedrzejczyk, Zhang improved her standing to 21-1 and records her first successful UFC title defense.

On the other hand, Jedrzejczyk headed back to the losing territory with a 10-4 record.

“She did great. There was something missing, but I felt all the punches. The swelling was bothering me. Congrats champ, and I’m very happy that we gave a good fight,” Jedrzejczyk stated.

The strawweight title duel was a no-brainer selection for the “Fight of the Night” citation as Zhang and Jedrzejczyk added an extra $50,000 to their respective bank accounts. 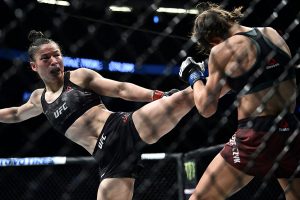 Meanwhile, Jingliang Li (17-6) suffered a demoralizing loss at the hands of The Ultimate Fighter alumnus Neil Magny (21-8) by way of unanimous decision.

Li briefly rocked Magny upon breaking from the clinch in the first frame, but the American used rangy striking, close-quarters knees, suffocating clinch work and impermeable takedown defense to confound his Chinese opponent for the rest of the welterweight contest.

Magny, who was coming off a 16-month layoff, effortlessly cruised to a clear-cut decision win over Li, sweeping the scorecards by identical 30-27 counts. 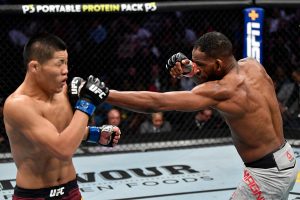 In claiming his first victory under the UFC banner, Mongolia’s Danaa Batgerel (6-2) could have not scripted it any better, defeating Argentinian stalwart Guido Cannetti (8-5) on the event’s preliminary card.

Though he had his hand raised in triumph, Batgerel had to force his way through the pressuring offense of Cannetti in the opening moments of the bantamweight encounter.

Cannetti torched the Mongolian standout with left high kicks, but it did not deter Batgerel. He stood his ground and operated behind his counter punches.

After landing a two-punch combo to the face, Batgerel followed it up with a huge left hook that dropped Cannetti to the canvas.

Lying defenseless on the mat, Batgerel swarmed on Cannetti with a plethora of solid blows to clinch the stoppage at 3:01 of the first round.