Wondergirl Jaroonsakgym was elated to win her MMA debut at ONE 157 earlier this month. The sexy Thai star submitted Zeba Bano in the opening round.

Although Wondergirl is better known for her exploits as a Muay Thai fighter she had been preparing for her MMA debut for years. Prior to her acrimonious split with Fairtex the 23 year old has been working on her BJJ and entered several tournaments.

Since leaving Fairtex to join Marrok Force MMA she has continued to work on her grappling and the Thai star got her reward last week:

"Wondergirl" 🇹🇭 is BACK!

Year of the tiger

Wondergirl is back in Bangkok and appears to have purchased a new bikini to commemorate the year of the tiger. While she is a few months late we don’t think many of her fans will be complaining.

The year of the tiger officially began on February 1st. We don’t know when Wondergirl purchased this particular bikini but she certainly seems to know her Chinese Zodiacs:

Her father was a Muay Thai fighter and both Wondergirl and her sister Supergirl have had success in the sport. But the former appears to have embarked on a new career direction.

Wondergirl might find there are more opportunities available to her as a mixed martial artist. The strawweight rankings have been removed from the ONE Championship website.

But there are plenty of potential opponents out there for Wondergirl including Tiffany Teo, Michelle Nicolini, Dayane Cardoso and Ayaka Miura. Xiong Jing Nan holds the title but she will probably need more than one win if she wants a shot at the champion.

Wondergirl is not the only fighter to move from Fairtex to Marrok Force. Top atomweight contender Denice Zamboanga also left the Pattaya camp to move a bit further north and base herself in Bangkok.

More recently controversial coach DJ Jackson was picked up by Marrok Force just days after his contract with Fairtex was terminated. In an Instagram post the Pattaya camp announced it had parted ways with the American who is accused of ‘stealing money from students, embezzlement, and fraud’.

Zamboanga recently got engaged to fellow Marrok Force fighter Fritz Biagtan. The Bangkok camp has emerged as a major player in Thailand’s MMA scene and appears to be developing something of a rivalry with Fairtex. 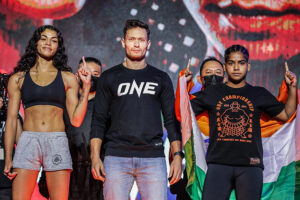