Yan Xiaonan picked up the biggest victory of her career with a unanimous decision over Claudia Gadelha to kick off the main card of UFC Vegas 13 on Saturday night (local time) in Las Vegas.

They met at the center of the cage in the opening frame and started throwing hands without a feeling-out period. Yan was very aggressive and paid for it by eating a solid jab by her opponent. While she was stumbling back Gadelha closed the distance and dragged the fight to the canvas.

The Brazilian immediately isolated the leg and worked to advance into the mount. Yan freed up her legs and stood back up but the Brazilian did not let her escape and continued with the clinch against the cage.

With double underhooks locked up, Gadelha was stagnant and Yan capitalized by staying active with punches and knees. The referee eventually separated them.

Gadelha completed a single leg and landed some decent ground and pound. At the same time, Yan was very active off her back connecting with elbows that started some swelling around her adversary’s right eye. 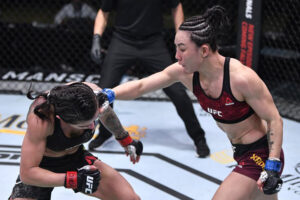 The tide turned in the second stanza. Yan picked up the pace and worked the jab to set up many of her combinations. Gadelha was limited to single strikes and slowed tremendously.

By the third round, Yan was in full rhythm and blasting off power strikes at will. Gadelha tried to press the Chinese fighter against the fence again but was eventually reversed.

Yan went back to the jab and was busting up her opponent’s face. She mixed up elbows and punches as Gadelha looking to tie her up in the clinch.

In the closing minute of the final round Yan connected with the jab and landing a clean double right-hand combo. When the bell rang to end the fight statistics showed the Chinese fighter had outscored her opponent by a margin of 63-33 in significant strikes.

The judges all saw the fight 29-28 in favour of Yan (13-1) who stays unbeaten in the UFC and extends her win streak to eleven in a row. Defeating a #4 ranked opponent will move her up the rankings and closer to current champion and compatriot Weili Zhang.

Meanwhile, Gadelha (18-5) has lost three out of six and can expect to slip further down the rankings when they are released next week. Speaking after the fight Yan said this win showed her heart as well as her technical development,

“For this fight, I never gave up. Everybody saw that. Everyone can see my progress.”

"Even though (I) got taken down twice in the first round … (I) never gave up."

Yan Xiaonan was able to bounce back from a tough first round to dominate the next two and pick up the biggest win of her career so far. #UFCVegas13 pic.twitter.com/cNfBM4yelC

In the main event Glover Teixeira (32-7) submitted Thiago Santos (21-8). The finish came with a rear naked choke in this battle between Brazilian light heavyweight veterans.

There was also a big win for former UFC heavyweight champion Andrei Arlovski (30-19-0-2) who, like Teixeira, turned 41 this year. He defeated Tanner Boser (19-7-1) by unanimous decision.