There are plenty of things to be concerned about when you are preparing to face an elite opponent in an MMA fight. But Yoon Chang Min is worried that Tang Kai‘s style is so boring he will be lulled into making an unforced error.

The two face off at ONE: ‘NextGen’ Part II which is being broadcast on Friday. Yoon says his biggest concern is that he will get bored and then make a mistake,

“I think the main point in this bout for me is to not get fooled by his boring style. I believe he’s a very boring fighter. If you look at the other opponents that he was able to finish, they got bored in that circle, lost focus and got hit by that one shot.” 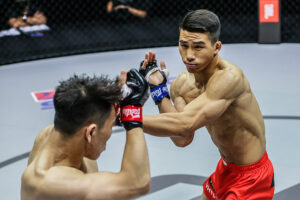 Yoon’s opponent has won seven fights in a row with five of those finishes coming inside the distance. But the Korean believes that all Kai’s opponents made the same mistake,

Yoon is coming off the first loss of his professional career. But four of his five ONE Championship wins have come by way of choke and the Korean knows this is his greatest weapon.

Opponents know it too and Yoon believes Kai will be so focused on defending the chokes that he won’t see the knockout coming,

“He probably studied me, and he probably trained a lot in defending the choke. So if he’s so focused on defending my choke, I think I’m going to be able to knock him out.”