Yoshiki Nakahara showed talent from a very early age. The ONE Championship featherweight earned himself a high school scolarship due to his exploits on the judo mat.

A glittering career as a judoka appeared to await Nakahara but his dreams were dashed by a devastating injury. Before his high school career had even begun he tore his ACL and spent an entire year on the sidelines.

This injury has ended the career of many athletes. But Nakahara spent the time studying footage of MMA fights and returned with a new found resolve,

“I learned not to give up if you have hardships and to find a reason to motivate yourself, to improve yourself,” he recalls. When he recovered he began training at Paraestra Hiroshima, focusing primarily on his ground game. In search of a place where he could hone his striking skills the teenager headed to Tokyo where he discovered Mach Dojo.

Having graduated the 18 year old decided to eschew the opportunity to study at university and instead move to Tokyo to train full time at under Pride, UFC and Dream veteran Hayato Sakurai at Mach Dojo.

Nakahara turned down a place at university in order to train at Tokyo. But there were conditions attached and he had a limited window of opportunity in order to realize his ambitions as a fighter,

“I promised my father that if in the first four years of doing mixed martial arts I could not get results I would give up my martial arts dream,” he shares. 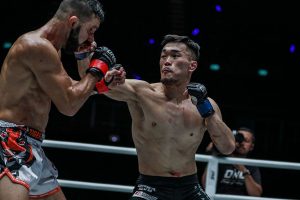 He lived in a dormitory with other aspiring fighters from the Mach Dojo and took a construction job to cover his living expenses. A few months after his 20th birthday the time came for Nakahara to make his professional debut.

He needed less than three minutes to finish Hiroto Uesako with a guillotine choke at Grachan 7. His opponent went into that bout with an underwhelming record of 1-3.

However Uesako would go on to enjoy a very successful career, winning the Deep featherweight title and fighting for Bellator, Rizin and Pancrase. In this context Nakahara’s debut win takes on much greater significance.

Nakahara scored his second win at Grachan 10, earning a decision victory over Japanese journeyman Hiroki Kishino. But his career hit a road bump when he was dropped a split decision to Kwang Hee Lee on a card promoted by Mach Dojo. The Korean had beaten some of the best fighters in his country and been in with some of the best lightweights of the day in Japan so there was no shame in the loss. The same could be said of Nakahara’s next defeat when he traveled to China and dropped another decision to local favourite Tuerxun Jumabieke.

There’s no shame in losing to a 14-0 opponent in your fourth professional outing. But Nakahara was clearly at a career crossroads, a third successive defeat would have left his MMA dreams in tatters.

The fifth fight of Nakahara’s career was particularly significant because he was handed a shot at the Gladiator featherweight title. He stopped another Japanese journeyman, Hidekazu Asakura, to earn his first belt and more importantly fulfill the promise he had made his father,

“It was in the fourth year that I won my first title. I was glad to get the win but happier (because) it was okay for me to keep doing martial arts as a living. It really was a huge moment in my life.” Nakahara never looked back, winning nine of his next 11 fights and maintaining a record of having never been stopped or submitted. Fighting for Pancrase he beat ONE Championship veterans Hiroshige Tanaka and Yusuke Kawanago.

The run of form brought him to the attention of Asia’s biggest MMA promotion and a ONE Championship contract soon followed,

“I was really grateful. I thought everything through, and, in the end, I was glad to be chosen to fight in the best promotion in the world,” he said.

At ONE: ‘Clash of Legends’ he burst onto the international scene with a stoppage win over Emilio Urrutia, finishing the American in the third round. His reward was a matchup against one of the division’s top contenders.

At ONE: ‘Enter the Dragon’ he faced undefeated American grappler Garry Tonon. Not only did Nakahara’s eight fight winning streak get brought to an abrupt halt but he was stopped for the first time in his career.

The 27 year old lasted less than a minute against Tonon. But his self belief clearly wasn’t dented as he wants a rematch,

”I have to avenge my loss, and then I have to move on with solid performances to get myself in a title match position. I have to use my striking to keep getting finishes,” he said. Nakahara might have started out as a judoka. But these days he is known for his striking skills and there is one opponent in particular the Japanese fighter wants to face,

“I want to face Martin Nguyen. Even if he weren’t the champion, I’d like to test myself against him. It would be toe-to-toe (because ) we’re both strikers so it would be a stand-up fight.”

With eight wins in his last nine fights talk of a title challenge is not completely outlandish. While Nakamura might need another victory or two to earn the opportunity he knows exactly how a fight with Nguyen would end,

“If I catch him, he’ll go down. if he catches me, it would be the same. One of us would definitely be going down.”