Emilio Urrutia proud to represent Phuket at ONE: ‘Clash of Legends’

Emilio Urrutia has been on the scene in Thailand for a while. He first started training in Phuket in 2013 and has been based there permanently for several years, fighting out of the world renowned Tiger Muay Thai camp.

The American has never had an opportunity like the one that awaits him on Saturday before. He’s fighting in the biggest indoor stadium in Bangkok on the ONE: ‘Clash of Legends’ card against Yoshiki Nakahara and needs no motivation for this one,

“I’m pumped. I can’t wait, especially because it’s in Bangkok. It’s going to be special,” he said.

Urrutia hails from the U.S. but has never actually fought there as a pro. All 17 of his fights have taken place in Asia but moving halfway across the world to pursue his fighting dreams has not always been easy,

“Being away from my family, my loved ones and the people I care about has been hard but when they support me that is what gives me the strength to keep training and doing my best, no matter what,” he said. Like so many people Urrutia was seduced by the idea of training in the tropics. From the moment he first started studying Muay Thai the 32 year old dreamed of one day moving to Phuket,

“They used to make these little video blogs of life on the road, training at Tiger Muay Thai in Phuket. So from the first day that I trained, I always knew that I wanted to get my skill level good enough so that I could go to Thailand and train in Muay Thai. That became my goal from that moment on.”

Urrutia enjoyed his first trip to Phuket so much that he was not particularly enthused about the idea of heading home. An unexpected job offer from the Juggernaut camp in Singapore materialized and the American immediately knew he would not be returning to the U.S. any time soon,

“My time to leave Thailand was coming up and I was already pretty sad that I was about to head home. Then my friend asks me, ‘Do you want to go and teach in Singapore?’ I ended up getting a job teaching at a gym over there. After that, everything took off.” 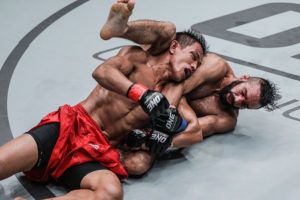 Rika Ishige and Shannon Wiratchai have both been training at Tiger Muay Thai to prepare for ONE: ‘Clash of Legends’. It means Urrutia will be surrounded by familiar faces when he takes on his Japanese opponent this Saturday,

“We will have the crowd on our side in Bangkok and the whole Tiger Muay Thai team out to support us. I’m honored to share the card with not just my teammates but also my friends in ONE Championship, Rika and Shannon.”

Nakahara is riding a seven fight winning streak that includes wins over two ONE Championship alumni. The Japanese featherweight has not lost a fight in over three years but Urrutia isn’t intimidated by his opponent’s credentials,

“I’ve fought in Bangkok three times before and I’ve never lost here. I’ve been working a lot on my striking as well as my wrestling, I’m 100% physically and mentally and I can only think about beating Nakahara right now,” he said. 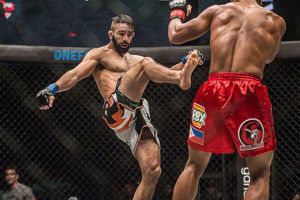 He has had stints in Singapore but Urrutia has been based in Phuket for the best part of six years. He never expected to spend so much time in Asia, or to earn a contract with ONE Championship but the American has been well rewarded for taking that first trip,

“Thailand is where I started my journey (and) I have never looked back. Everybody thought I was crazy, but it ended up working.”

ONE: ‘Clash of Legends’ on Saturday promises to be another pivotal moment for the American. Nakahara represents a stern test for someone who has lost their last two fights but Urrutia is determined to get back to winning ways and take another step on the journey towards fulfilling his fighting dreams.