In front of a capacity crowd at the Mall Of Asia Arena in Manila Joshua Pacio defeated compatriot Rene Catalan in the promotion’s second all-Filipino world title bout, which served as the main attraction of ONE: ‘Masters Of Fate’.

Pacio submitted his compatriot with an arm-triangle choke in the second round. While many pundits were expecting a toe-to-toe trade between two stand-up specialists the champions took a different route and took his opponent to the mat, only to get caught in a kneebar.

It took Pacio almost a minute to escape the submission attempt before regaining top control. The round finished with the Team Lakay representative raining down strikes. 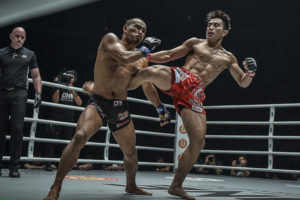 Catalan is a multiple time wushu world champion but he pressed for a takedown at the start of the second stanza. Pacio defended the attempt and quickly positioned himself in side control.

Content to keep the action on the ground, Pacio effortlessly mounted Catalan and rained down strikes to soften up his defense. He then transitioned back into side control where he had the chance to snugly lock in the fight-ending arm triangle choke at 2:29 of round two.

The win improved Pacio’s professional record to 18-3. On the other hand, Catalan fell 6-3. It’s his first defeat since September 2016 when he embarked on a six fight winning streak. 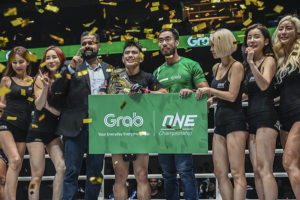 It was a clean sweep for Team Lakay at ONE: ‘Masters Of Fate’. Former lightweight champion Eduard Folayang (22-8) is back in the winner’s circle and looks just as good as before, but it was not the outcome that he hoped for.

Folayang took home a technical unanimous decision victory over Mongolian stalwart Amarsanaa Tsogookhuu (5-2) in the co-headliner of the evening. The end came abruptly at 2:32 mark of the second round when both men’s heads inadvertently collided, opening a huge gash on the left cheek of the Filipino.

Folayang was given the mandatory five minutes recovery time, but the referee and the ringside physician opted to halt the contest as blood profusely leaked from the gruesome cut. 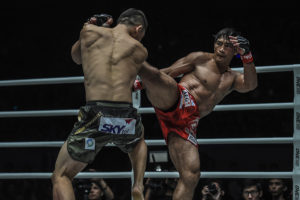 Since the match went to the judges because the scheduled three-round encounter had already passed the midway point, the three scoring officials at ringside ruled in favor of Folayang.

It was not hard for the judges to figure out the decision. Folayang operated behind a relentless stream of leg kicks and heavy right hands that left Tsogookhuu at a disadvantage for the majority of the bout.

Landing his combinations with laser-like precision, Folayang seemed to be in cruise control before the accidental clash of heads that caused the anticlimactic conclusion of what was supposed to be a three-round encounter.

Living up to his reputation as the organization’s ‘Rematch King’ Geje Eustaquio (13-8) avenged his heartbreaking loss to Toni Tauru (11-8-1) nearly three years ago, knocking out the Finnish grappling wizard in the third round.

Eustaquio effortlessly picked Tauru apart in the stand-up, jolting his rival with stunning left hooks and lashing kicks to the body.

As Tauru tried desperately to stave off attacks that came from all directions, Eustaquio continued to put on the pressure. In the third round, the ex-flyweight kingpin connected a thunderous spinning sidekick to the midsection that dropped his opponent to the canvas.

There was no need for follow-up shots from Eustaquio to seal the deal as Tauru creased in austere pain, forcing the referee to wave it off at the 2:11 mark.