During his Muay Thai career Youssef Boughanem has enjoyed both success and longevity. The Belgian has been living and fighting in Thailand for 12 years and has won titles at Lumpinee, Rajadamnern and Siam Omnoi.

He first appeared on TV screens in Thailand in 2009 and would rapidly establish himself as a well respected fighter on the scene. His journey actually began several years earlier as a young man in Brussels.

“I started training at friend’s gym when I was 12 years old. I was crazy about football at first but as I got older I started to get into trouble and get more aggressive so Muay Thai was good for me,” said Boughanem.

He started at a relatively early age, at least by western standards, gained plenty of experience on the European scene,

“I was 14 years old when I had my first fight and I wasn’t really scared. I just felt very confident. I won by KO in the second round. I was unbeaten in my first 36 fights until I got a draw in a fight in Holland,” said Boughanem.

Eventually Boughanen decided to the time had come to test himself in Thailand,

“After my 45th fight I came to Thailand for three months. I spent the first two months training at the famous Jocky gym where many famous French fighters had trained before me like Stefan Nikiema, Jean Charles Skarbowsky and many more. I had two fights against Wanmeechai Nakonthongparkview, who was famous in the main stadiums, and I lost the first on points but beat him the second time.”

The lure of Lumpinee

Although he only stayed for a few months Boughanem’s heart was already in Thailand. He had offers on the table from kickboxing promotions in Europe but found the lure of Lumpinee impossible to resist.

“I already followed the sport in Thailand and knew many of the Thai fighters, so it was natural for me to want to come and fight here. I had a contract with ‘It’s Showtime’ to fight K-1 style rules and went back for one fight but my heart was here in Thailand and I gave up the opportunity to fight in Europe and possibly make big money to come and follow my dream.”

In 2015 he won the Siam Omnoi middleweight belt, becoming the first ‘farang’ (non Thai) to win a title at this stadium. He beat Rungrawee PKSaenchaigym in a match which would have been watched live on Channel 3 by millions of Thais, and Boughanem has fond memories of this particular fight.

“This is my best memory. It was my first big stadium title and there was a two million baht bet on the fight. I beat him and then they arranged for me to fight his stablemate Chanajon for the belt, with a one million baht bet this time and I beat him too.” You don’t win belts at Lumpinee, Rajadamnern and Siam Omnoi stadiums without facing some big names. Boughanem has been in with the likes of Sudsakorn Sor Klinmee, Thongchai Sitsongpeenong, Aikpracha Meenayothin, Saiyok Pumpanmuang and Buakaw Banchamek as well as numerous other champions.

He’s had some tough defeats as well as those glorious victories but struggles to pick out any particular opponent as being the best.

“All the Thai fighters I faced have been very tough in their own ways, whether in strength and heart or in their technical abilities. My toughest opponent though is probably myself (because) there are times you have to dig very deep in the fight and push yourself harder than you think possible. The mental battle with yourself I think is the toughest opponent to overcome.”

Boughanem’s younger brother Yassine is also a Muay Thai champion but the difference in stature between the siblings is noticeable. Youssef campaigns at middleweight while Yassine is the reigning WBC heavyweight champion. Still, they both train together in Pattaya.

Having fought out of a few different camps, he now owns and runs the Petchsaman Gym alongside Yassine. While Boughanem’s success has brought him a level of financial stability, he knows not everyone involved in Muay Thai is as fortunate and is happy to be giving something back.

“I am lucky in that I get paid well to fight so I am comfortable here. We opened the gym about four years ago, we started at another location and then moved here after a year. I wanted to give back to help fighters and trainers too because sometimes in their gyms the trainers struggle to make any money but they like to work for me as they know they get paid well and looked after well.” He has a couple of rising stars training at Petchsaman Gym and list two names to look out for.

“Attif Baddredine from Morocco is going to be a big name for sure. He fights now at Max Muay Thai and is getting better very fast, trains very hard and will be a star I’m sure. Also Omar Walabi from Lebanon is another fighter I think will do very well.”

We are in the era of social media and camera phones meaning that even a fracas on a street corner gets recorded and shared. When Boughanem began fighting in Thailand things were different and he can’t even remember some of his early fights.

“There are so many shows now, it is easier for Thai and foreign fighters to become famous. Shows like Max Muay Thai means there can be more money to fight and there is social media now. It is easier to become well known. I had so many fights, but a lot of them were not on TV or social media so it’s hard to remember them all. Sometimes I get fighters come up to me asking if I remember them and that we fought before, but I have nothing to show for that.”

You don’t come to Thailand and beat the locals at their own sport without encountering a bit of resistance. Boughanem has been on the wrong end of some controversial decisions and needed administrative help in order to become the Rajadamnern middleweight champion. He thought he had stopped Kompetchlek Looprabaht in the first round to win the Rajadamnern 160lbs title but the referee disqualified him, ruling that a low blow had caused the stoppage. Boughanem would not be denied and was able to have the result overturned and secure a rematch.

“The first time I lost to him by foul, many people could see it wasn’t a foul shot and we took the case to the Sports Authority of Thailand for review. We were supported by the stadium and at the review it was decided that it wasn’t a foul and [were] given a rematch for the belt, which I won by knockout.”

Boughanem has a bout coming up later this month in the Middle East and has interrupted his training camp to talk to us.

“I fight in Abu Dhabi on the 23rd of November against an English fighter Jake Purdy. I have watched his fights online already, he is a good fighter. I never take any opponent lightly and am training very hard for this fight.”

He also has a 7 year old son who, just like his father at the same age, is more interested in kicking balls than people.

“It is up to him, if he wants to fight I would support him but only if he really wanted to do it. Right now he is crazy about playing football.”

At the age of 28 he is already a veteran of over 100 fights. Boughanem is still in his prime but will stop competing when the time is right. Whatever happens, he will always be involved in the sport of Muay Thai.

“I will continue for as long as I still have the hunger and desire to fight and my body allows. A lot of fighters carry on longer than they should but I have the wisdom to know myself when I don’t want to do it anymore. I love Muay Thai whether fighting or watching so when I retire from fighting I will probably try promoting.”

Saketdao Petpayathai wants to put on a Muay Thai clinic at ONE: ‘Reign of Dynasties’ Part II

Superbon Banchamek is confident he could beat Giorgio Petrosyan 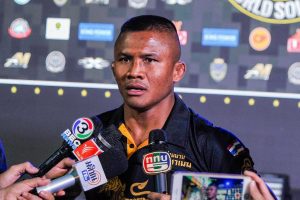 Buakaw to negotiate with ONE Championship once coronavirus crisis is over