The domestic MMA scene in Japan is flourishing despite the global pandemic with fight cards taking place every weekend. But for some fighters domestic success will never be enough, and Yuma Horiuchi falls firmly into this category.

The 23 year old will challenge for the interim LFA flyweight title this weekend. After starting out with Deep and winning five fights out of six in Japan he decided to relocate to the US in order to pursue his MMA ambitions.

Horiuchi faces Charles Johnson at LFA 110 this Friday night (local time) and knows exactly what is at stake. He dreams of signing for the UFC and thinks winning the interim belt would be enough to earn him that opportunity,

“I am going to finish this fight, win the belt and then sign for the UFC.” Horiuchi is now based in Orange County and he fights out of Team Oyama there. He has won three fights out of five since relocating to the US and the two losses both came by way of split decision.

The Japanese fighter took a two year break from competitive action and did not appear at all in 2018 or 2019 but says he made good use of the time,

“That was my preparation period. I needed to make sure I was ready to fight in America.” Most fighters would be bitter after suffering back to back split decision defeats, particularly in a foreign country. But Horiuchi is philosophical about the experience and says he learned a lot from it,

“I don’t know if the decisions were correct or not but what I do know is that I learned a lot from those two fights.”

Having lost on his LFA debut Horiuchi decided to drop down a division. He returned to the flyweight division in April and submitted WSOF veteran Donavon Frelow in the opening round.

That result was enough to earn him a shot at the interim flyweight title. Champion Victor Altamirano is set to compete in Dana White’s Contender Series later this year, just like Frelow did, and in his absence the promotion decided to introduce another belt. 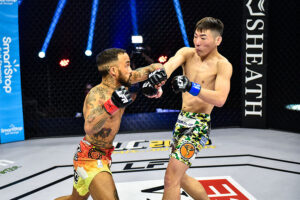 Horiuchi’s LFA record might be 1-1 but he thinks submitting Frelow in just over 90 seconds was more than enough to earn him a shot at the belt,

“I was not surprised to get a title shot. I think I earned it because my last opponent was very famous and strong.”

He admits to not knowing too much about his upcoming opponent,

“I couldn’t tell you what his strengths and weaknesses are. I will find out on Friday but I can tell you that he is a strong opponent.” The event will be broadcast in Japan and Horiuchi is hoping his countrymen will tune in,

“The event is live on Abema TV, it is a big app in Japan, so I hope everyone will be watching.”

Kyoji Horiguchi who is just a letter away from being his namesake was only able to establish himself as one of the best bantamweights in the world by leaving the UFC and signing with Rizin. Horiuchi has moved in the opposite direction but says he was motivated by a desire to test himself against top tier opposition,

“In America the level of MMA is very high. For me it is more interesting than Japan.” 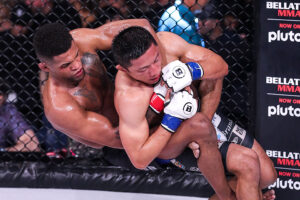