Yusuke Yachi has lost three fights in a row. On Sunday he hopes to avoid making it four in a row when he takes on compatriot Hiroto Uesako at Bellator Japan.

The 29-year-old has not won a single bout since August of 2018. He has suffered disappointing setbacks at the hands of Luiz Gustavo, Johnny Case and Mikuru Asakura.

“I am longing to experience that—being victorious again. It has been quite a long time since I won a fight and heard the crowd celebrate my victory. That’s one of the tough aspects and harsh truths about this sport. There will be winners and losers,” he said through his translator.

Another loss would seriously depreciate his standing but Yachi still gazes at the bright side of things, reminding himself of the qualities that made him fall in love with prizefighting in the first place,

“Fighting is my passion. I love every bit of it, especially the rush that I get each time I step inside the cage or ring. That feeling gives me hope. MMA is my life and I know as long as I keep fighting, I will be a winner again,” he said. 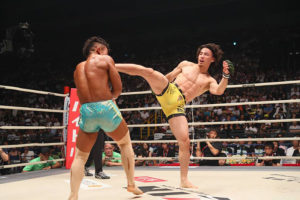 Knowing the importance of this match Yachi plans to incorporate all the lessons he has learned in the past against the dangerous Uesako. His opponent also seeks redemption after yielding to Gustavo at Rizin 19 this past October.

“I’m really excited and thankful for this match, especially since I am coming off a string of losses. This is a good opportunity for me to bounce back and finish my year with a win,” Yachi said.

“It’s my second try to win this year, and I’ve certainly picked up a lot in my past fights. I want to show the things that I worked for. I hope I get to show those improvements.” Yachi does not turn 30 until next year and feels that time is on his side. He is confident he can turn his career around and emerge as a genuine contender in the lightweight division,

Once touted as one of the top lightweight prospects in Asia, Yachi’s stock has fallen after three straight losses. He knows that he needs to make a statement in Sunday’s fight,

“This is also an opportunity to show that they cannot count me out. My aim is to win, no less. To show that I still have plenty of potential in me.”