Stock in featherweight contender Mikuru Asakura continues to rise as he clinched a clear-cut unanimous decision win over Yusuke Yachi in a lightweight bout at Rizin 17.

In front of a passionate crowd at the Saitama Super Arena in Tokyo, Japan, the 27-year-old had no issues against a taller, bigger opponent and was able to land at will from bell to bell.

Eager to demonstrate that he was not petrified of his foeâ€™s edge in size, Asakura torched Yachi with his superb boxing and then wobbled him with a crushing right hook in the closing moments of the first round.

Asakura picked up where he left off in the second frame, hurting Yachi with a solid uppercut to the body. In the same round Yachi did his best work during a brief grappling exchanges but looked well out of his depth in striking terms.

Having a standing target in front of him, Asakura drilled Yachi with his left cross, sneaked in a few uppercuts, and blitzed with punches when the opportunities presented themselves.

In the final moments of the third round, both men engaged in an all-out exchange of punches. With strikes flying wildly it was Asakura who had the last laugh, dropping Yachi to the mat with a clean left hand. 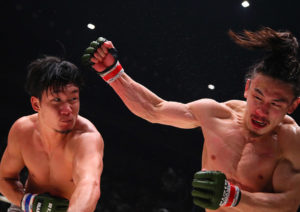 With Yachi lying on the canvas and a few seconds remaining Asakura decided to climb the ropes and celebrate instead of going for the finish. At this stage he knew his hand would be raised in triumph.

His masterful performance was reflected on the judgesâ€™ scorecard with a unanimous decision Asakura improves his professional record to 11-2 and is now riding a six-fight winning streak.

On the other hand, a victory remained elusive to Yachi as he lost his third-straight match. The defeat to Asakura downgrades his MMA standing to 20-9. 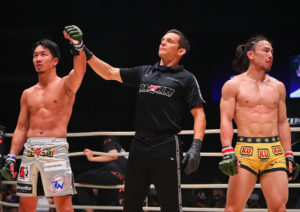 In the co-main event of the evening, Shintaro Ishiwatari (26-7-4) returned from a 19 month layoff to effortlessly vanquished Ulka Sasaki (22-7-2). He finished the UFC veteran by second-round submission.

Known to be an accomplished judoka, Ishiwatariâ€™s impeccable grappling was a difficult problem to solve for Sasaki from the get-go as the latter had struggles in fending off his opponentâ€™s advances on the mat.

That plan of attack paid dividends in the second stanza, where Ishiwatari hurt Sasaki with a series of hard knees on the ground. He then saw an opening to fasten a wrenching north-south choke and force his foe to tap for the victory. 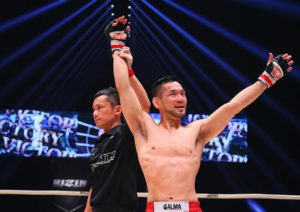 Aside from the featured attractions of the night, three men were able to surpass their respective tests with flying colors in order to book their spots for the highly-anticipated Rizin Lightweight World Grand Prix this coming October.

Former UFC fighter Johnny Case (26-6) of the United States annihilated Japanese combatant Satoru Kitaoka (42-20) with his suffocating and strenuous ground game to both score a first-round technical knockout and secure a place in the tourney. 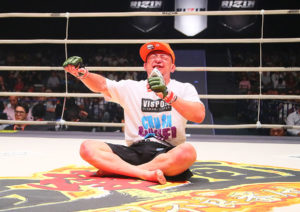 It was announced during the broadcast of Rizin 17 that the organization plans to put on the remainder of the qualifying matches at their next event in Nagoya, Japan on August 18th.