Unless you have been living under a rock for the past couple of months you will know what the wildly successful Korean series Squid Game is about. For the hermits among you, cash strapped contestants compete in challenges to win cash and the penalty is death.

Episode 3 featured a tug of war game and the guys at AKA Thailand decided to recreate it:

The penalty for losing was a lot less harsh, a loss of face rather than a loss of life. And with guests like millionaire playboy Dan Bilzerian regularly visiting AKA we doubt whether many of the contestants in this game were desperate for money.

But Squid Game is everywhere and the uniform worn by the guards was definitely the go to Halloween outfit in 2021. Hopefully the series doesn’t inspire anyone to build their own island lair and lure in poor people before killing them off in droves.

But if it inspires people to do a fun, physical challenge like this then that can’t be a bad thing can it? Dan Bilzerian is back at AKA Thailand! 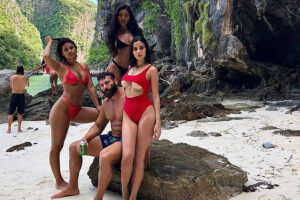 Mike Swick on AKA Thailand and the pandemic (Video)