All fighters make weight ahead of Rizin 16

This afternoon’s Rizin 16 weigh ins went smoothly. All the fighters appear to have come in at or below the contracted weight with Tenshin Nasukawa tipping the scales at 56.9kgs and Martin Blanco weighing 56.3kgs ahead of their ISKA super featherweight title fight.

A title will also be on the line in the co-main event. Ayaka Hamasaki defends her Rizin super atomweight title against promotional newcomer Jinh Yu Frey. The former came in at 49kgs while the latter was 48.9kgs.

It won’t be the only big super atomweight fight on the card. Kanna Asakura and Miyuu Yamamoto will both be looking to establish their title credentials with the former weighing 48.8kgs and the latter tipping the scales at 48.85kgs.

American heavyweight Jake Heun was 108.9kgs meaning that Roque Martinez, who came in at 114.05kgs, will be the heavier man tomorrow. There wasn’t much to choose between Yusaku Nakamura and Topnoi TigerMuayThai with the Japanese bantamweight coming in at 58.7kgs and the Thai at 58.8kgs 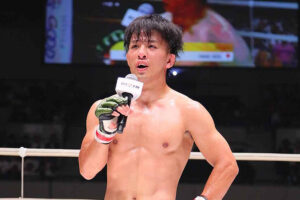