On Sunday night the Ota City Gymnasium played host to the Rise World Series. It featured the quarter finals of the <58kgs and <61kgs tournament and the main event produced a finish from Tenshin Nasukawa which is destined to be the stuff of kickboxing legend.

Tenshin faced Federico Roma with a spot in the semi-finals of the <58kgs tournament at stake. In the opening round the two southpaws went at it with the Japanese star’s left cross, long left knee, high kick and spinning backfists unable to penetrate the tight guard of the Argentinian.

In round two Tenshin picked up the pace, his left body punches and knees were slowing Roma down and by the start of round three the local favourite scored a knockdown after countering a low kick with a straight left. 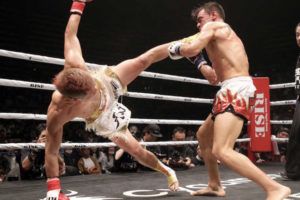 After a quick doctor check for the cut over Roma’s right eyebrow, they went back to work. Tenshin was brimming with confidence and he pulled off a finish that will never be forgotten.

Tenshin crouched down in his trademark ‘Triceratops Pose’ to the delight of the crowd. It was much more than just a bit of showboating though because he used the position to launch a Capoeira style cartwheel kick.

It connected clean with the jaw of Roma and it was immediately obvious he would not make the count. If ever there was a computer game-like finish, this was it with Tenshin progressing to the semi final in style. 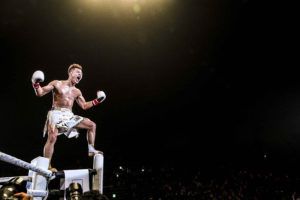 He will go up against Suakim PKSaenchaigym who stopped Thalisson Ferreira in the third round. If Tenshin secured the best finish of the entire show this was definitely fight of the night with the two men trading knockdowns.

Round one saw Ferreira opening strongly with his punches and Suakim defending well and replying with low and middle kicks, but it was the Thai fighter coming under pressure towards the end of the round.

Round two opened with Suakim throwing knees and Ferreira seemingly slowing down until he threw a big overhand right sending the multiple time Muay Thai champion to the canvas.

Suakim got up and returned with punches but Ferreira caught him with a right hook and scored a second knockdown. Round 3 began with a ferocious onslaught from the Brazilian who was throwing his right cross and looking for a spinning backfist.

But Suakim’s right cross and right knee had Ferreria on the backfoot. The Brazilian looked hurt and after an accumulation of damage it was a teep to the body that saw him crumple to the canvass in agony.

The other Thai fighter in the <58kgs tournament has an easier night’s work. Rungkit Morbestkamala consistently scored with body kicks and long knees to take a clear cut decision win over Fred Cordeiro.

Rungkit will face Shiro in the other semi final of the <58kgs tournament. The Japanese fighter also scored a third round stoppage win, finishing Vladyslav Mykytas in the latter stages of the fight.