Alyona Rassohyna earned a spot in the atomweight Grand Prix with her submission win over Stamp Fairtex at ONE: ‘Unbreakable’ Part III earlier this year. But the Ukrainian was surprised to discover she would be fighting the same opponent again in the quarter finals.

Rassohyna rematches Stamp at ONE: ‘Empower’ this month and cannot understand why her opponent has been handed an immediate rematch,

“I didn’t really expect the rematch to happen so soon. When I fight someone and win it is normally a closed door to me. Usually when someone loses they have to have a rehabilitation process where they beat some other fighters first. This time the promotion decided to do it straight away so I’m surprised.” Having spent nearly 15 minutes inside the cage with Stamp very recently Rassohyna knows what to expect when she faces the same opponent in the same venue for the second time in the space of four months,

“She has areas she could improve on. The main thing is she is not active, she is not moving, she is always standing. Because of that I punched her a lot of times and I did a lot of takedowns so I think that is the biggest weakness.”

Given Stamp’s background in Muay Thai and kickboxing Rassohyna had expected aggression from the Thai and was surprised when it never materialized,

“I expected her to attack all the time but she was waiting for me to attack and biding her time so I didn’t expect this type of fight.” 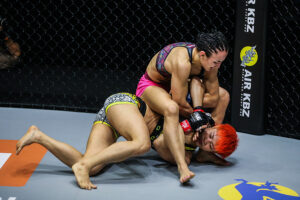 Rassohyna was unable or unwilling to pick out a favourite for the tournament but acknowledged that the competition is tough,

“All eight fighters in my division are really strong and some of them I have faced and fought before and I feel that it will be hard work to get to the top in this division.”

She has a 2014 decision loss to Seo Hee Ham on her record and could potentially face the Korean in the semi final. Rassohyna is not particularly enthusiastic about the prospect of rematching Stamp would ‘love’ to run it back with the former Rizin and Road FC champion,

“I wasn’t experienced enough when I fought Seo Hee Ham. Right now I am physically stronger and I would love to fight against Ham because she is a very respected fighter with a lot of strengths. I would love to do that rematch.” She was working in the legal industry in 2014 but has been a full time professional fighter for the past four years. Rassohyna believes she has made some serious improvements since giving up her day job to focus on MMA,

“I have grown exponentially. I really improved my wrestling and have fought a few times so have more experience and more of a feel for the cage. I changed my team, my team in Ukraine is way more experienced and there are a lot of experienced fighters.”

Whereas she trained in the winter last time Rassohyna notes that the weather in Ukraine is milder now and she thinks this will make life easier as she travels to Singapore for the second time this year,

“Spring is starting so I’m not too worried about the acclimatization because when it’s winter her it can be really hard to acclimatize when you come to a tropical country.” 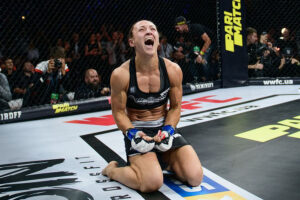 “I am the only female professional fighter in my gym, all my training partners and sparring partners are men.”

Having faced two of the fighters in the tournament Rassohyna is better qualified than most to assess the field. Interestingly she thinks the bigger fighters will be the most dangerous,

“All the girls are really strong but the most dangerous ones are the ones who cut weight because they are physically stronger.”