Local hero Amir Khan has bounced back to earn a hard-fought split decision win over Malaysian Ev Ting at ONE: ‘Edge of Greatness’ in Singapore.

In a razor-close lightweight bout, the Evolve MMA product did just enough in the judges’ eyes to have his hand raised and snap a three-fight losing streak in front of a raucous hometown crowd.

Both fighters began tentatively, grappling for ascendancy throughout the first round until Khan landed a clean straight-right to bust Ting’s nose and start the blood flowing.

In the second stanza, Ting was clearly the aggressor. He scored a pair of takedowns, but was unable to capitalise any further on his pressure in the face of Khan’s defense.

‘E.T.’ continued to press the action in the third round, as Khan (12-6) constantly back-peddled out of harm’s way and looked for the counter shot, which he found on a couple of occasions. Ting (17-7)  pulled off a late takedown, but it wasn’t enough to save him from defeat. 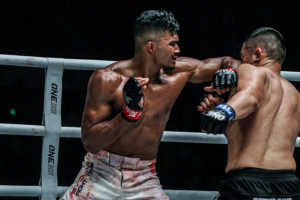 Meanwhile, Troy Worthen continued his rapid rise with an emphatic second-round TKO against China’s Chen Lei in their catchweight contest.

‘Pretty Boy’ pushed the pace early on the feet, before taking the contest to the mat, where he dictated proceedings with his elite wrestling and some hard-earned ground and pound.

Early in the second round, the American landed a slick double-leg takedown and maintained a suffocating pressure, firing shots as he hunted for a submission.

After sweeping to take the back, Worthen (6-0) unleashed a rapid fire series of blows to the head of Lei (6-2) to force the referee to step in. 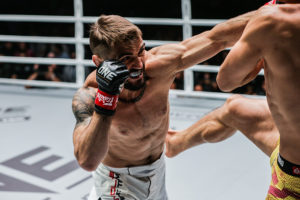 In a bout adjusted to catchweight after Furqan Cheema weighed in well over the lightweight limit, India’s Rahul Raju added to his opponent’s misery with a second-round submission victory.

Raju used his wrestling to grab the impetus in the opening round despite Cheema’s persistent holding of the ropes to prevent being taken down, an offence that saw him dealt a yellow card from referee Olivier Coste.

‘The Kerala Krusher’ went right back to the well in the second round, taking Cheema’s back and sinking in the fight-ending rear-naked choke. He improves to 7-4 while his opponent drops to 3-1. 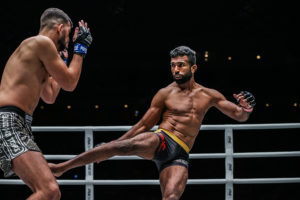 Japan’s Shuya Kamikubo spoiled Bruno Pucci‘s bantamweight debut with a comprehensive unanimous decision victory. He flew out of the gates with a Jorge Masvidal-esque flying knee attempt but soon found himself on the wrong side of a number of submission attempts from the former no-gi world champion.

Kamikubo defended well and managed and turned the tide on the ground, taking top position and doing plenty of damage with his knees.

That trend continued in the second and third rounds, as Kamikubo (11-1-1) turned up the pressure and dominated the grappling contest on his way to a comfortable win over Pucci (7-4) 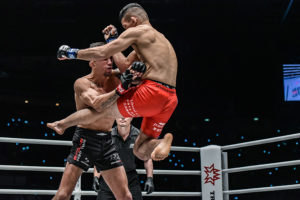 The Thai veteran landed his trusty right leg kick regularly through the first two rounds, then ramped up the volume in the final stanza, as he initiated a Thai clinch followed by some thunderous knees to drop Irman to the mat and put an end to the contest. 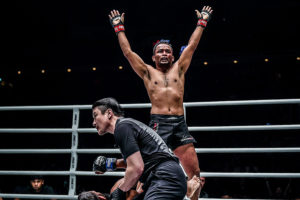 Colbey Northcutt had her hand raised at the end of her eagerly anticipated promotional debut against Putri Padmi, with a methodical performance that earned her a unanimous decision victory.

The American came out firing, using her enormous height and reach advantage to excellent effect and putting Padmi in immediate danger. Padmi looked to escape with a takedown but it was Northcutt who was promptly in the superior position, working several submission attempts to no avail.

Northcutt (1-1) went back to her striking in the second, almost landing at will against the hapless Indonesian. The final round was much the same story and while Padmi (0-2) offered more aggression, she had no answer for her opponent’s shots from range. 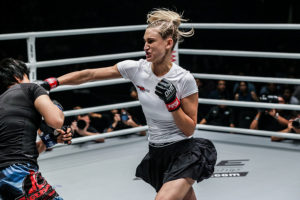 The first round was a torrid affair, as both fighters settled quickly into their work. But it was Wen who claimed the early honours courtesy of a searing straight right that left Silva clearly wobbled.

The Brazilian wisely sought to work his trademark grappling in the second round and although Wen defended gallantly initially, ultimately managed to cinch in a lightning-fast armbar that left his opponent no choice but to tap. 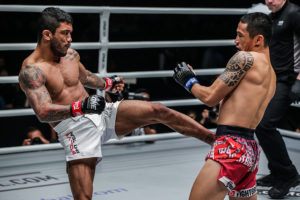 After a measured first round, Nong-O let loose in the second, crumpling Saemapetch to the canvas firstly with an onslaught of uppercuts, then a barrage of straight punches that had Saemapetch saved only by the bell.

Nong-O put an end to proceedings in the fourth round with a laser straight-right that toppled Saemapetch and secured victory.

After a tightly contested opening round, Petchmorrakot turned up the heat and pressed forward aggressively with some searing knees that sank the Englishman to his own twice before the referee had seen enough.

Vietnamese prospect Nguyen Tran Duy Nhat proved why he’s a potential star of the future with a scintillating second-round knockout of Japan’s Yuya Watanabe in their Flyweight Muay Thai contest.

Duy Nhat sent Watanabe to the canvas twice in the space of a minute with a pair of lethal right head kicks, as the Japanee fighter somehow survived to see the end of the first round.

But it didn’t take long for Duy Nhat to finish the job in the second, delivering a third head kick knockdown that left Watanabe lying limp.

In the opening bout of the preliminaries, Liam Nolan edged Brown Pinas to claim a unanimous decision win in their featherweight Muay Thai contest.

Nolan comfortably got the better of the early exchanges, dropping his Dutch opponent in the opening round. Pinas pulled the ledger back in an action-packed second, but the Brit did enough to clinch victory in the third.