ONE Championship bantamweight Bruno Pucci doesn’t need to venture far from home each day for a reminder of where his ultimate goal lies in martial arts.

In fact, he doesn’t even need to leave home at all. Every morning when he makes his way to breakfast he sees the atomweight belt belonging to his wife, ONE golden girl Angela Lee, sparkling in the Hawaiian sun,

“I go down to the living room and the belt is there and I look at it and think ‘one day,'” Pucci says.

Not only does it provide a source of motivation, it also comes with a huge dose of admiration and pride. Pucci has seen first-hand the amount of toil and dedication that Lee puts into her craft. He knows precisely what it takes to become world championship calibre,

“It’s not pressure, it’s an inspiration. It’s something that I look at every day. I’m really proud of her and she inspires me. And I see how they train everyday and I just want to do the same.” And that’s exactly what ‘Puccibull’ has been doing for the last few months in preparation for his long-awaited return to the cage against Japan’s Shuya Kamikubo at ONE: ‘Edge of Greatness’ on Friday.

The 29-year-old Evolve MMA product hasn’t fought since his first-round submission win over Kotetsu Boku in Jakarta back in January, as he’s negotiated injury and the inherent visa issues that came with relocating to Hawaii to live with Lee.

It’s in the paradise of the ‘Aloha State’ that Pucci has completely immersed himself in martial arts, training and coaching everyday at the Lee’s United MMA gym.

With brother in law Christian Lee, ONE’s lightweight champion and recently crowned Grand Prix king, also on hand, Pucci is taking full advantage of the world championship pedigree around him to lift his game to another level,

“I’m just so blessed that we can that life together with her, Christian and my father in law Ken all training together. I think that’s no making a big difference for now. I get to learn off those world champions, everyday and I’m just super happy with that. The environment is great and it’s just a blast.” A marriage that involves two world class martial artists is likely everything you imagine it to be. The two are uniquely placed to be able to empathize with the other when it comes to the varied challenges, the emotional highs and the lows, that come with life as a professional fighter.

“Being in the same sport, we can share our feelings more because we understand how it feels leading into fight week, dieting etc. Because it’s tough leading into the fight, all the behind the scenes stuff that people don’t see. I think we’re able to support and understand each other better because of that.”

Their schedule is jam-packed from morning until night with training and coaching – a unique union but one they wouldn’t trade for any other,

“It’s funny because we wake up together, go to the gym together. We start training at 8am, then we train, until 11am. We have a lunch break, rest up a little bit then we teach the kids in the from 4pm until 6pm, then we train again until 8pm again. So, the whole day is training and sharing knowledge.”

They’ll even strap on the gloves and get a few rounds of sparring in,

“I tell people she always beats me up if I don’t wash the dishes,” Pucci laughs. “But that’s our lifestyle and we just love it. I couldn’t be happier.” 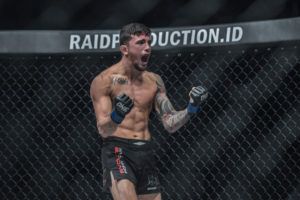 Being involved in both Christian and Angela’s fight camps have also made helped improve his own approach to preparation and upskilling,

A former two-time No-Gi World Champion, Pucci’s grappling credentials are well established. But he insists he’s been working hard to ensure he’s more than just a ground game specialist, and his improvements since he’s moved to the U.S. are testament to that,

“A lot of people are still training segregated; Muay Thai one day, wrestling one day, jiu-jitsu one day. For us, what makes a difference is when we train it all together. Of course my background was jiu-jitsu, but I’ve been able to round out my game and put everything together, which makes me a better fighter.”

His upcoming opponent Kamikubo is also a grappling-based fighter, meaning Pucci likely won’t have to face too much action on the feet. Not that he’s complaining.

He’ll have a chance to string together a three-fight win streak, his first with ONE, if he gets his hand raised at the Singapore Indoor Stadium and he’s supremely confident that’s precisely what’s going to happen.

“Honestly, I feel like I can dominate this fight. Of course, we come from the same grappling background. But I’m excited to take this challenge and to face it and see who’s better.”