Evolve MMA was founded in 2008 and has rapidly grown into the number one fight camp in Asia. The original gym was the brainchild of Chatri Sityodtong , an entrepreneur with a lifelong passion for martial arts, and has facilities rivaling the standards found anywhere in the world.

Originally starting with a few of his Muay Thai fighters from Thailand, the dream was to create a training environment with a family atmosphere. Somewhere people could call home, share their passion for martial arts and try and help people to make changes in their lives.

Moving forward to the present day and the gym now has five locations in Singapore, all modern, state-of-the-art facilities with a large staff available to cater to everyone’s needs. A new location at Clarke Quay Central opened this month and Evolve MMA has a stable of world champion trainers from multiple fighting disciplines.

Wesley De Souza, vice president of Evolve MMA, says that the mission is to do much more than simply teach people self defence or combat technique,

“Evolve’s mission is to unleash greatness in everyone through the power of martial arts. Our academies’ combined schedules have over 700 classes per week led by our world champion instructors. We have classes all throughout the day for men, women, and children of all ages and experience levels,” he said. Evolve MMA doesn’t just cater to the individual, and there are corporate programs tailor made to help companies keep their employees in shape and boost their confidence and mental strength via martial arts. They also offer packages for people wanting to train on vacation in Singapore.

Outside of the five locations in Singapore there is the opportunity to learn online with Evolve University, a huge collection of online training videos. There are also plans for more facilities in the future with gyms likely to open outside of the traditional home of Singapore.

Evolve MMA is best known for its stable of champions, past and present. They include former Lumpinee title holders like Nong-O Gaiyanghadao, Dejdamrong Sor Amnuaysirichoke, Sam-A Gaiyanghadao and Peneak Sitnumnoi. Sam-A, Dejdamrong and Nong-O have recently won titles with ONE Championship.

There is also a steady stream of talent passing through. The likes of Ben Askren, Demetrious Johnson and Giorgio Petrosyan all use Evolve MMA as a base when fighting in Asia, and there are frequently seminars with visiting fighters like Tyrone Woodley. Evolve MMA is very careful in who they select to be a part of their team of instructors. The former champions will find themselves training students of all levels and ability so they have to be capable of teaching patiently as well as fighting ferociously.

The philosophy of Evolve MMA is to ‘unleash greatness through the power of martial arts’. They have helped people from all walks of life to achieve goals, whether to lose weight, build or regain confidence, escape from abusive relationships, change bad habits or to compete at the highest levels of combat sport.

The rise of Evolve MMA has been rapid and with an international expansion on the horizon this Singaporean powerhouse looks set to continue going from strength to strength. 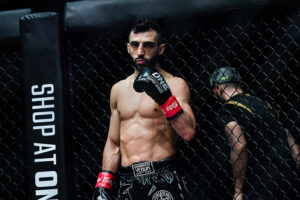 Giorgio Petrosyan to fight in Italy on April 30th