Amir Khan has long been considered one of the top talents in the lightweight division in ONE Championship but he will finally get the opportunity to compete for a title this Friday in Manila.

Khan, who has amassed an impressive 11-2 mark in the promotion, has pulled off plenty of big wins during his career but none made him happier than his most recent performance against Team Lakay fighter Honorio Banario.

According to Khan, it was the addition of new Evolve MMA head coach Eduardo Pamplona that made all the difference in his training and the results showed after he pulled off a first round rear naked choke submission.

“For the last two or three years at Evolve we didn’t have a head coach,” Khan explained. “What we did as training partners, we just led each other’s sessions and we helped each other along way. Before the last fight against Banario, we finally got a new head coach Eduardo Pamplano and he brings the whole team together and he really pushed me to the limit. I’ve never trained so hard in my entire life as I’ve trained under him.

“This is what I’ve been working towards to get the title shot. It’s proof to everyone that I’ll become a world champion like I said. I feel like I’m ready right now.” 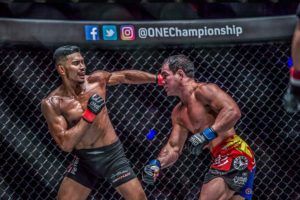 At ONE: ‘Conquest of Champions‘ on Friday, Khan will face former champion Eduard Folayang to crown a new lightweight king after Martin Nguyen surrendered the belt due to injury.

Folayang has gone 6-1 over his past seven fights with his only loss coming to Nguyen in 2017. While he’s been a stalwart of the ONE lightweight division almost since its inception, Khan feels like he already has Folayang scouted out, largely thanks to his most recent bout against Banario.

“I think it’s a really interesting story because I beat his teammate,” Khan said. “They are similar fighters and I feel like Eduard Folayang is just a slightly better version of Banario. Obviously, Eduard Folayang wants to get revenge for his teammate for the loss. I think it will bring the best out of him and I know it will bring the best out of me.”

Khan admits when looking at Folayang’s strengths and weaknesses, nothing much has changed for him during his time with ONE Championship. 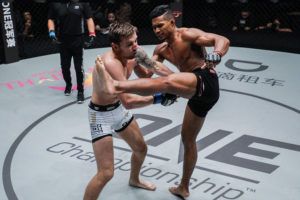 He knows that the 33-year old striker is just as dangerous as ever but he’s also somewhat predictable.

Obviously, Khan isn’t going to give away his game plan ahead of the fight on Friday but he knows there are various ways for him to win and that’s the real key when going up against somebody like Folayang.

Khan is confident that he can pick his shots — on the feet or on the ground — and being the better mixed martial artist is what he sees carrying him past Folayang to become the new lightweight champion.

“I feel my biggest advantage is my ability to mix everything up together,” Khan stated. “He will be guessing my every move. I feel that’s my biggest advantage in this fight. I know he won’t be taking me down and I know he wants to keep his mid-range kicks and he wants me to be the aggressor to time his spinning attacks. But the thing is, he does not know what I’m going to do.

“I might strike with him, I might take him down, I’m going to mix it up. This round I might put pressure on for the takedowns, the next round I might work more on my boxing. I feel it’s hard to prepare for me for this fight. He won’t be expecting what I’m going to do.” 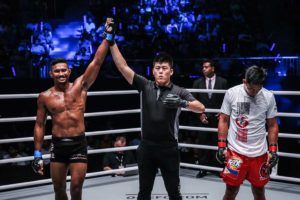 At the end of the night, all Khan really cares about is finally being crowned champion.

That will represent the culmination of a career filled with hard work while also setting Khan up for a big 2019 as ONE Championship continues to grow, expand and add new talent to the organization.

“I’m excited for it. Once I get the title, it’s just the beginning,” Khan said. “The belt represents all the hard work I’ve been doing all these years. It means everything to me. I think it will be even more motivation to be better in the future.”