ONE: ‘X’ took place at the Singapore Indoor Stadium on Saturday night. The same venue had hosted the promotion’s inaugural event in 2011 and this show commemorated the tenth anniversary.

Postponed from last year due to Covid-19, the show featured some of the biggest names on the roster and was witnessed by a sell out crowd. In the main event Angela Lee (11-2) returned from a two year absence to defend her atomweight title for the first time since becoming a mother.

Opponent Stamp Fairtex (8-2) posed her plenty of problems in the opening round, hurting the champion with a left hook to the liver. But Lee recovered and never looked like losing once she worked out how to get the Muay Thai veteran down.

She scored an early takedown in the second stanza and Stamp spent the remainder of the round defending submission attempts. She nearly survived but with ten seconds remaining Lee sank in a rear naked choke and afterwards she celebrated in the cage with her baby daughter.

Lee became the first fighter to ever be awarded the brand new ONE Championship belt. The promotion minted brand new titles in honour of their anniversary. 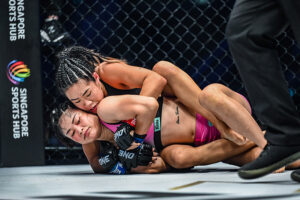 The co-main event was also a ‘striker vs. grappler’ affair but the clash of styles was actually written into the rules. Rodtang Jitmuangnon faced Demetrious Johnson in a bout that consisted of alternate Muay Thai and MMA rounds.

Johnson survived the opening Muay Thai round fairly comfortably. He was on the back foot but never looked like getting stopped and the former UFC flyweight champion submitted Rodtang with a rear naked choke in the MMA round. 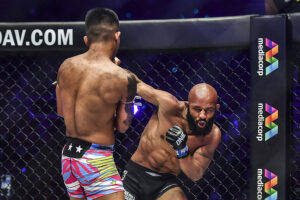 Eduard Folayang was also fighting under unfamiliar rules. He made his Muay Thai debut against John Wayne Parr but made light of the gulf in experience to take a clear cut decision win.

Parr had hip replacement surgery last year and looked significantly slower than the Filipino who scored a flash knockdown in the second round. The Australian landed a flying knee late in the fight which made for some thrilling exchanges but it was Folayang who walked away with the decision win.

There was also a big win for Kang Ji Won who knocked Paul Elliot out cold in the opening round of their heavyweight fight.