When it comes to striking Angela Lee is massively outranked by Stamp Fairtex. The Hawaiian has a BJJ black belt for consolation and many see the upcoming ONE: ‘X’ atomweight title fight between the pair as a straightforward clash of styles.

Lee is not one of them though! She is adamant that her striking is good enough to cause the Muay Thai and kickboxing veteran problems,

“I’ve faced world-class strikers in my career, and never once was I afraid. Never once was I overwhelmed. I stand my ground, and I believe in my striking. Look at my last fight against Xiong Jing Nan and you can clearly see the damage on her face after the fight. So my striking is definitely not an area where I see it as my weakness. Probably a strength.” 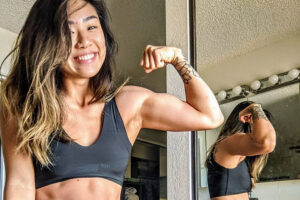 But while Stamp spent years as a Muay Thai fighter before transitioning to MMA the champion has been a mixed martial artist since virtually day one. She thinks this experience will be key when they face off in the ONE: ‘X’ headliner,

“Stamp is highly credentialed. She is a Muay Thai and kickboxing world champion. She has been at the top, and she knows what it takes to get to the top. I’m not overlooking her. I respect her credentials, but that’s just the thing, you know? I know that Stamp has been doing this since she was a little girl as well. But for the for majority of her life, she has just been training striking and mixed martial arts is quite different.” 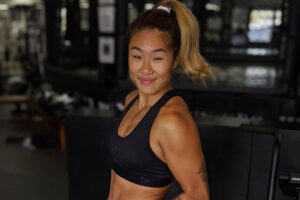 Stamp’s career trajectory since transitioning to MMA has been steep. She has proven to be a fast learner but Lee believes there is no substitute for experience,

“I think that with my ground game, I’ve been doing mixed martial arts my whole life, so where I truly feel that I shine the most is in the transitions. On the striking to the wrestling to the grappling to the ground-and-pound, and transitioning through each of those areas seamlessly. I think that I can change things a lot (quicker) than she can keep up with, and I think that’s going to be a problem for her.”

Lee has clearly had a head start when it comes to MMA and she sees herself as being ‘years ahead’ of the challenger,

“She’s been doing an amazing job in the past few years, rounding off her game with her team at Fairtex, but I just think that I’m years and years ahead of her.”