Xiong Jing Nan is the first and only female fighter to hold the ONE Championship strawweight belt. But she knows that the real action is at atomweight and the the 33 year old wants to compete in the division again.

She faces Ayaka Miura at ONE: ‘Heavy Hitters’ next week. But the fight that Xiong really wants is a trilogy bout with reigning atomweight queen Angela Lee, 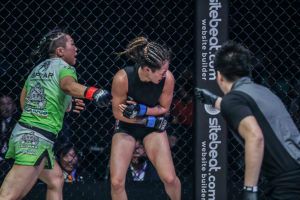 Miura is a grappler who tends to either win by submission or not at all. Xiong is impressed by her opponent’s grappling ability,

“There’s no doubt that Miura is an excellent athlete. She’s really good at ground fighting techniques and jiu-jitsu techniques. It’s really hard to escape once she has grappled you,” she said.

Having been the distance in her last few fights Xiong has apparently had her ability to finish fights called into question by Miura. The champion responded angrily,

“She also thinks that I’m not able to knock down any opponent? She thinks I’m losing the ability to KO? We will see in the ring. I will show her what a KO is and how it feels to be knocked down by Xiong Jing Nan.” 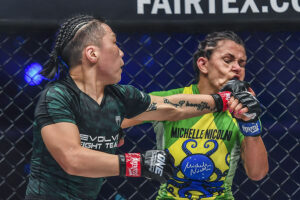 Having beaten a BJJ black belt last time out Xiong is not intimidated by her opponent’s grappling credentials either,

“I have fought against excellent ground fighters and I have been always well prepared with takedown defense tactics. In my last fight, I defeated Michelle Nicolini, who’s an eight-time (BJJ) world champion.”

If Xiong wins next week she will have beaten every single one of the top four ranked strawweights. She is close to clearing out the division which makes a drop down to strawweight, where fighters like Seo Hee Ham, Denice Zamboanga and Itsuki Hirata also await, an intriguing prospect.

But there is only one name on Xiong’s lips. She wants to fight Angela Lee and if the can beat Miura and the Hawaiian can defeat Stamp Fairtex that could be the fight to make in 2022.