Anissa Meksen arrived in ONE Championship with a reputation for being one of the best kickboxers on the planet and she certainly lived up to it with an epic second round knockout against Christina Morales on her debut earlier this month.

The French star was made to wait more than a year to finally showcase her skills inside the ONE circle and she wasted little time in calling out champion, Janet Todd, for what would be an historic match-up for the sport.

“My goal is more than clear, I want face Janet Todd for the belt soon as possible, and I really hope that will  happen before the end of the year,” Meksen told AsianMMA.com. Meksen has already been reviewing footage of the American and it is fair to say the French fighter is not intimidated,

“She’s a great fighter with big wins but she’s not impressed me.”

But she does acknowledge that the American has done well to win the title and put together a six fight winning streak,

“Janet is a great fighter with six consecutive wins in the division. She’s the champ of our division and I want to face all the best fighters in the world to prove and confirm my ranking. I can’t wait to face her” she said. Given the respective credentials of the two fighters Meksen believes that a fight between her and Todd would be one for the history books,

“I was the two times Glory champion, she’s the ONE champion, I think this is the biggest female fight that we can organize in kickboxing today. All fans want it, she wants it, I want it, let’s do it,” she said.

Todd has six wins and one defeat since arriving in ONE. She suffered a loss to Stamp Fairtex on her promotional debut in 2019 but clinched the title in the rematch the following year. Three of ‘JT’s’ six wins delivered a knockout with the rest going the distance. 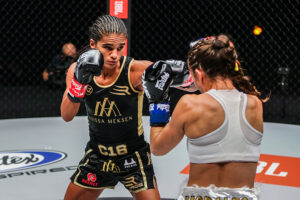 Meksen admits she will need to be well prepared when the time comes to face the American,

“I have no special key, as always I will adapt my style regarding of what she will do. Be sure that I will arrive for this fight prepared as always for a big fight,” Meksen continued.

Having won numerous world titles in both kickboxing and Muay Thai, there’s already a strong argument for Meksen as being one of the best to ever do it. She believes her past achievements speak for themselves but suggested the ONE belt will be the final piece of the puzzle

“I’m already ranked number one pounds for pound for four to five years but I am really missing the best belt. I’m focused on that belt, I need it!” said Meksen.