Anissa Meksen knocked Marie Ruumet down twice and could probably have finished the fight if she wanted to. But the French fighter settled for a decision win at ONE 156 tonight.

Afterwards Meksen admitted she was worried about how much damage she might have been doing to the Estonian with the MMA gloves:

Meksen is renowned for her left hook and dropped Ruumet with one in the opening round. The Estonian spent the entire 15 minutes with her back against the cage eating punches from the former Glory champion.

This was a Muay Thai fight but Meksen was able to impose her kickboxing style without ever needing to throw elbows or instigate a clinch. Having transitioned seamlessly from one sport to the other it seems she could challenge for an atomweight title in both.

But Meksen is laser focused on the kickboxing belt. She wants a shot at champion Janet Todd and after the fight she said, 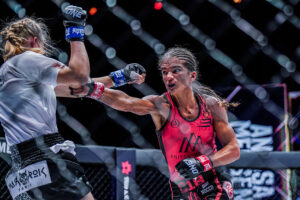 This was Meksen’s first time fighting in MMA gloves. She admitted afterwards that she was worried about how much damage she might be doing to Ruumet with them,

“I’m scared because I can make big damage with these. But I like it.”

Meksen also admitted to feeling bad for her opponent and suggested she could have done even more damage to Ruumet had she chosen to,

“She was crying, it touched me and I didn’t want to finish the fight. I pray all the time that my opponent will be safe during the fight. I feel like this.” 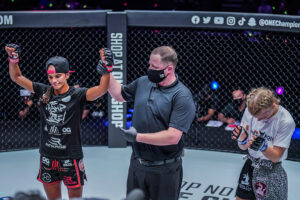 Meksen clearly needs a step up in opposition. Sympathy probably won’t prevent the French fighter from going for broke when she faces Todd for that kickboxing belt.

Having won both her ONE Championship matches in convincing style Meksen certainly looks in position to call for a title shot. It will be interesting to see whether the matchmakers hand her the bout she has been calling for vociferously for several months.