Meksen has also enjoyed success in Muay Thai winning the WBC and WPMF bantamweight belts. It’s an impressive collection but there are two titles she wants to add to it,

“My objective is crystal clear, (to) win the ONE kickboxing and Muay Thai belts. I’ve traveled the world, 18 different titles and, honestly, those are the two that I’m missing to top it all off.” Meksen faces Martine Michieletto in a strawweight kickboxing bout at ONE: ‘Empower’ next week. The winner will be an immediate contender for the title in that division and the French fighter is excited to be showcasing her skills in Singapore,

“I’m not anxious or scared at all. Frankly, I’m the opposite. I’m really motivated to get back in the ring. I really want to do well and I can’t wait to show what I’m made of.”

However Meksen sounds more interested in dropping down to atomweight. She expects Michieletto to be much bigger and is not convinced this is the right division for her,

“I’m not going to lie about it, it’s quite a big weight difference (but) ultimately I’m always thirsty for a challenge and I always take a beautiful opportunity if it presents itself. I hope to give a tremendous performance and, after that, sign for my next fight at 52.2 kilograms.” While Meksen has spent most of her career at 118lbs her opponent has consistently been competing at 126lbs. The French fighter is the bigger name but Michieletto is the bigger fighter and that brings an element of pressure,

“It’s true I’m under a lot of pressure because I have a status to maintain, but one thing I do is keep pushing myself to the limit to improve step by step to reach the highest level possible.”

The two are both familiar faces on the European scene and Meksen has a lot of respect for her opponent,

“Michieletto is a girl who I respect a lot. She is very strong. She’s the full package. She can do everything. She has good hands, she drops bombs, and she has good kicks.” While she acknowledges it is a difficult fight Meksen also realizes this is a huge opportunity. She sees ONE Championship as the pinnacle of the sport for standup fighters and is determined to make a good impression on her debut,

“I’m training very, very hard, and I don’t underestimate her. I signed with ONE simply because it’s the best organization in the world, I need to make an impression. I can’t afford to make a big mistake now.”

She has had to wait a while for her ONE Championship debut. But Meksen has been training continuously and now that the moment has finally arrived she sees it as a date with destiny,

“I’m determined to win and I have it in my head that it is my destiny at the moment. I live kickboxing and eat kickboxing, my goal is to prove to the world I’m the best by taking those belts.” 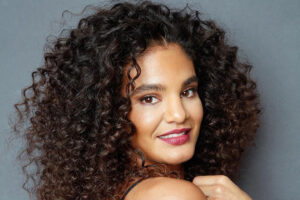