We don’t know when Anissa Meksen will be fighting next but the French fighter definitely isn’t slowing down. She shared footage of herself pulling off a lightning fast combo on her Instagram page:

A title shot surely looms for the French fighter after bursting onto the scene with a very impressive performance on her ONE Championship debut last year. She already has atomweight champion Janet Todd in her sights.

Anissa doesn’t appear to have a fight booked right now. But she is training hard and looks to be ready and raring to go whenever an offer arrives.

ONE Championship has been ramping up its schedule of kickboxing fights. A featherweight Grand Prix is already underway while a light heavyweight title fight was booked for this month but Covid-19  put paid to that.

Anissa will be looking to become a champion in 2022 and judging from the footage of her training she seems determined to make it happen. 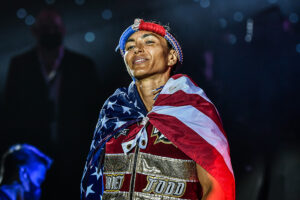 Janet Todd says Anissa Meksen is on her radar