Asha Roka has an opportunity to catapult herself to the upper echelons of the atomweight division at ONE: â€˜Dreams of Goldâ€™.

The 20 year old is slated to collide with two-sport titleholder Stamp Fairtex in an MMA bout. The reigning ONE atomweight champion in kickboxing and Muay Thai will have the home crowd behind her but Roka will not be overawed by the occasion.

â€œIâ€™m going to her home, but at the end of the day, in that cage there will be her and me with a pair of gloves. Nothing more. Weâ€™re going to test each other and the one with more hunger and the best preparation will be the winner,” said Roka.

Roka may be a fresh face to many fans of the organization but the SFL veteran is determined to make a big impression in her promotional debut,

â€œWe are preparing very hard because we are going to face one of the best in the division in my debut. I am the new girl, and the female division of ONE is growing. I am determined to prove that I am worthy to be here,â€ she stated. 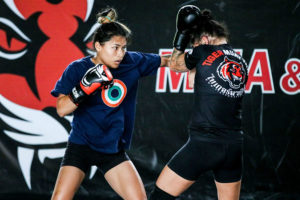 While Roka has more experience in MMA terms Stamp is clearly a bigger name, particularly in Thailand, but the Indian believes she can pull off the upset,

â€œTo the common eye it may be a mismatch because she is the champion in two sports. But this is MMA (s0) anything can happen and I have the skills to finish her,â€ she warned.

As a mixed martial artist, Roka holds a perfect 4-0 record and boasts a 100% finishing rate. She has also had success on the amateur boxing circuit in India.

Her last four MMA matches ended under three minutes and she doesnâ€™t plan to go the distance on her maiden ONE Championship assignment,

â€œWhen I go into the ring or cage, all I think about is hitting my opponent. Maybe my punches are so powerful that they get knocked out quickly. I think itâ€™s because of my boxing background that I get such results most of the time.â€

Roka spent a few weeks at Tiger Muay Thai in Phuket to prepare for this contest and believes that the physical improvements she gained will set her in good stead versus Stamp,

â€œI came all the way from India to Thailand to learn how to fight with knees and elbows, how to clinch and maneuver. She is very good at stand up as she is a Muay Thai and kickboxing champion, but I feel she does not have as much power as I do. Once I punch her, she will feel it for a long time,â€ she said.

But while she is primarily a striker Roka is prepared to exploit Stampâ€™s supposed weakness if the bout hits the canvas,

â€œI am quite good on the ground as well because I have finished two fights with submissions. Once we get in there and start throwing hands and it hits the ground, she is going to see that,â€ she said.

Stampâ€™s quest to conquer the world of MMA resumes on Friday but Roka is keen to spoil the party and instantly establish herself as a force in ONE Championship’s atomweight division,

â€œI want a challenge. I want people to really think it is impossible for me to win because that is when I am going to show them they are wrong. I am ready for Stamp Fairtex,â€ she declared.