Aung La Nsang has racked up some incredible achievements throughout his storied career. He is one of the biggest ONE Championship stars having simultaneously held titles in both the middleweight and light heavyweight divisions and has a big fan following in his native Myanmar.

The veteran looked back to his best when he knocked out Japanese veteran Yushin Okami at ONE 163. In the lead up to the fight La Nsang suggested he still has one more title run left in him.

But the 37 year old is also a keen student of Asian martial arts culture and has a couple of other experiences on his bucket list,

“As a fighter, for us to go to Japan and compete in the sumo arena, that was historical and amazing. To do that in Lumpinee Stadium would be amazing as well.”

La Nsang has fought twice on ONE Championship cards in the Ryōgoku Kokugikan which is the main sumo stadium in Japan. The promotion is now putting on weekly events at Lumpinee Stadium and he wants in,

But in the immediate future he is eyeing up a spot on the upcoming ONE on Prime Video 10 card. That takes place in Colorado in May and La Nsang, a long term US resident, is hoping to be involved,

“Put me in, coach. I want in on that show! I would love to be on one of those cards. It would be amazing.”

Having lived in the US for the best part of two decades La Nsang knows the market well. He would be happy to play matchmaker and thinks he knows exactly what the American fans want to see,

“They have to showcase Rodtang and the Muay Thai guys because Muay Thai in 4-ounce gloves is amazing. There are a lot of Muay Thai fans here in the East Coast and the West Coast who love Muay Thai. They’re going to fill up the arena,” he predicted.

La Nsang already has a fight booked in Bangkok. He will be taking on Fan Rong at ONE on Prime Video 6 next month in what will be his second fight in the space of three months.

He has made it clear he will not be competing at light heavyweight in the future. But there are plenty of opponents at middleweight for him and plenty of fans, particularly in Myanmar, who will be excited to see what 2023 brings for La Nsang. 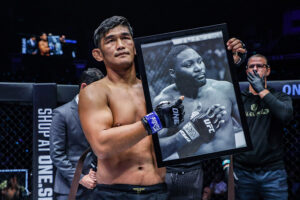