Aung La Nsang expects a clash of styles when he faces Reinier de Ridder at ONE: ‘Inside the Matrix’

Aung La Nsang found out in February that he would be fighting Reinier de Ridder. An injury to the Dutchman followed by the global pandemic put the middleweight title match in jeopardy.

But the Dutchman has recovered and international fighters will be given special dispensation to fly in to Singapore for next week’s ONE: ‘Inside the Matrix’. The middleweight champion finally gets to face an opponent who must have been on his mind for several months and La Nsang knows exactly what to expect,

“Reinier is crafty on the ground. He wants to take you to the ground and he wants to look for submissions,” he said. Submissions are de Ridder’s most potent weapon. La Nsang is well aware of that and would like to keep the fight standing,

La Nsang has 12 submission wins on his record. He is not worried about his opponent’s grappling skills but says he will play to his strengths,

Holland is not known for producing wrestlers. It is a country more readily associated with kickboxing and La Nsang thinks his opponent will struggle to dictate where the action takes place,

“He’s a high-level grappler, and he’s got some slick submissions but I don’t think he’s a high-level wrestler. So I think he’s going to have a hard time taking me down and I don’t believe his ground game is much better than mine. If it does go to the ground I’ll be fine.”

The 35 year old is no stranger to adversity. He has lost ten fights and while that might take a bit of shine off his record La Nsang believes it means he will be stronger mentally than the undefeated de Ridder,

“As an undefeated fighter he has never been pushed to his limits. He’s never taken shots like the ones that I’m going to be throwing at him, so we’ll see how he fares with that.”

La Nsang contracted Covid-19 in Florida. But aside from this enforced absence the reigning middleweight and light heavyweight champion has been training at Sanford MMA throughout the pandemic and believes he has made significant improvements,

La Nsang is riding a seven fight win streak and has finished his last six opponents. He is hoping for a similar outcome next Friday,

“I see this bout ending with a very exciting finish.” 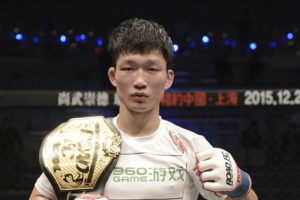 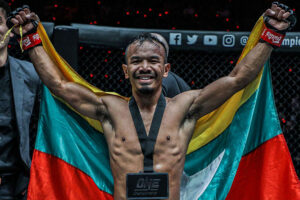 Tial Thang says he is inspired by his Sanford MMA teammates ahead of ONE: ‘Battleground’ Part III