Aung La Nsang wants his middleweight belt back. If you have noticed that the Burmese fighter is looking a bit hairier these day there is a very good reason for that,

“I want the belt back eventually, but it’s up to ONE. I’m not shaving until I get my belt back, and my wife’s getting pretty tired of my beard.”

He faces Vitaly Bigdash at ONE: ‘Full Circle’ next Friday in a trilogy fight that has been five years in the making. The two have already shared a cage for 50 minutes but it was so long ago that La Nsang does not know exactly what to expect from the Russian,

“Since our first meeting five years ago, I don’t think we’re the same fighters anymore. You go into a fight working on all your skill sets, and you game plan the best for the guy you’re going to fight.” 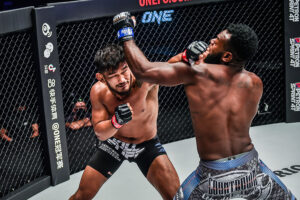 He thinks that the improvements both men have made in the intervening years will make this even better than the previous two bouts,

“I approached this as a brand new fight. It’s not like we fought a few months ago. It’s been five years. But we did go ten rounds, so I know what his strong suit is. I know what his skill set is. But he’s still going to develop as a fighter, and I’m still going to develop as a fighter. You’re going to see a better version, a better trilogy match, than what you saw in the first two showings.”

He put on a stellar showing in his most recent outing, finishing former middleweight title challenger Leandro Ataides. But La Nsang says there was a lot going on behind the scenes heading into that fight,

“Leading up to the fight, I had some issues. I had to really pray. By the time I fought, I was mentally, physically, and spiritually there. For me, that’s important. If I’m there, I know I’m a problem for anybody. And that fight shows it.” He says there have been no such issues heading into next week’s contest,

“It’s been a great camp. A little long, but we did all the homework. We did everything right, so I’m excited to put on a show. My pain threshold is very high, and I’m just ready for war.”

The bad news for his wife is that La Nsang doesn’t appear to be in a hurry to fight for the title again. It sounds like he is happy to work his way through all the contenders to earn his shot,

“It doesn’t matter who’s next. I just want to keep competing and keep getting better.”