Aung La Nsang ready to fight ‘anyone and everyone’

Whatever Aung La Nsang’s ambitions for 2020 were they probably didn’t involved getting Covid-19 and losing his ONE Championship middleweight belt. The year didn’t go entirely according to plan for the 35 year old and he intends to make amends.

He still holds the ONE Championship light heavyweight title. But that is not the belt which is on La Nsang’s mind right now.

Reinier de Ridder submitted him in the opening round at ONE: ‘Inside the Matrix’. La Nsang has his sights set on regaining the middleweight title from the Dutchman,

“Getting my belt back is all that’s on my mind right now and giving Reinier a whooping. If it’s not Reinier, then I really don’t care. I’ll take out all the contenders. Just line them up. It doesn’t really matter to me. I’m not set on Reinier. I’m set on anyone and everyone to get my belt back.”

While his priorities seem to lie at middleweight La Nsang has not forgotten about the light heavyweight title. Once he has regained the former he plans to defend the latter,

“I never have new year’s resolutions. I have goals that I set. My goal is to get my middleweight belt back, defend my light heavyweight belt, put on entertaining shows for the fans, and just be the best mixed martial artist I can be so that I can give back to Myanmar when I’m done.”

He has been a professional for 15 years and has fought 38 times. La Nsang is also a father of two so it is no surprise to hear he is already thinking about what he might do once his competitive career comes to an end. 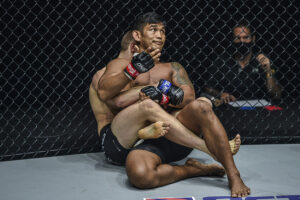 Despite going winless in 2020 the Burmese fighter will have some fond memories of the year,

La Nsang has enjoyed some success on the regional circuit in the US before signing with ONE Championship but was by no means a big name. He is now a household name in his native Myanmar and it’s been a rollercoaster ride over the past six years.

He has gone from fighting in halls and hotels in the US to competing in some of the biggest indoor venues in Asia. So much has happened in the last few years, and La Nsang’s success was built on the back of 11 ONE Championship wins during this period.

He says that the time has flown by but that the pandemic has taught him one extremely valuable lesson,

“I’m only 35. I can remember when I was 21 and now, in the blink of an eye, my son is a five-year-old boy. The pandemic, if it teaches us anything, it should teach us that life is short and we should spend time with our families and loved ones because you never know how short life is.”