Ben Askren: ‘where do they find these judges?’

Ben Askren was as shocked as the rest of us by the scoring in the strawweight title fight at UFC 268 today. Rose Namajunas claimed a split decision win over Weili Zhang at Madison Square Garden.

One of the judges scored four rounds for Namajunas and the former ONE Championship welterweight king could not understand how:

We thought Zhang won there were a couple of close rounds. Absolutely no-one saw Namajunas winning four of them though except, it seems, for one of the people who is actually paid to judge the fight.

The judge in question is called Eric Colon. The other two scorecards read 48-47 either way and were much more realistic even if the decision to award round two to Namajunas was a bit generous in our opinion.

It was a very disappointing way for Zhang to lose and we think she was hard done by. We aren’t the only ones by the sounds of it. 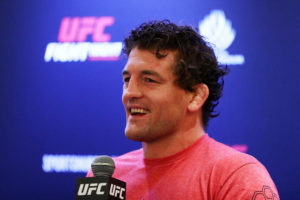