Brazilians silence the Seoul crowd with title wins at AFC 11

The event at Sindorim Techno Mart in Seoul had the AFC openweight and welterweight titles on the line. Going into the headliner 170lbs champion Bae Myung-Ho was the heavy favorite against Boeno.

The first two frames were controlled mostly by Bae. He utilized top position and peppered his opponent with shots after successfully getting the fight to the ground each round.

However, Boeno had his moments. In particular a tight guillotine early in the first and a kneebar attempt in the second with the Korean showcasing his grappling technique to escape. 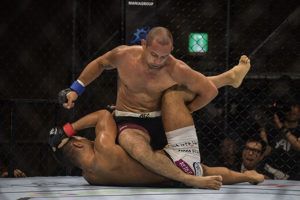 The third round looked to be heading in the same direction with Bae dominating on top but this time Boeno used a different entry point to lock up the leg. The Korean was caught in a kneebar and this time there was no escape.

The former champion had no option but to tap meaning that Boeno (39-11) picks up his ninth consecutive victory and becomes only the second man to hold the AFC 170lbs strap.

For Bae (17-6) this was the first defeat in a decade. The former model has found some fame appearing on variety shows in Korea and it remains to be seen whether he will continue competing in MMA. 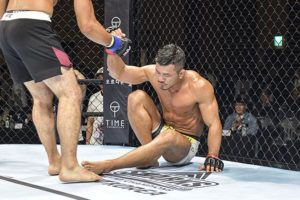 The other title fight of the night was contested in the openweight division. Giacomo Lemos was defending his title he won at AFC 10 in January for the first time.

He faced former title-holder Lim Jun-Soo but overcame a lethargic start to pound out his opponent in the second round. The first round saw Lemos initiating the clinch and attempting takedowns continuously.

When he finally got Lim to the mat the South Korean surprisingly got back up and continued the fight on the feet. But the Brazilian’s strategy of of forcing his opponent to defend takedowns and grind in the clinch paid dividends in the next round.

At the start of the second Lim came out the gate pressing forward with a more aggressive striking attack. He aimed to draw Lemos into a brawl and it worked for a short period. 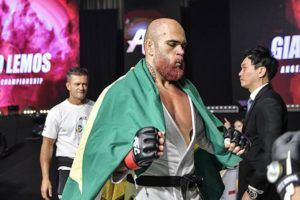 About thirty seconds in, Lim launched a barrage of punches and had Lemos on shaky ground but the Brazilian was able to wrap up and recover. After they restarted in the center of the cage the champion flew in for a takedown along the fence.

Lim seemed to have run out of energy and did little to defend the takedown. Once on the mat he held on for life but Lemos just slammed down his fists until the referee called a stop to the action.

Lemos (6-0) keeps his unblemished record intact and successfully defends the title. It will be interesting to see who will be the next challenger since he has basically demolished the best openweight fighters AFC has to offer.

Despite many chances, Lim fails at recapturing the championship belt and drops his record to 12-12. He has lost three straight title fights dating back to early 2018. 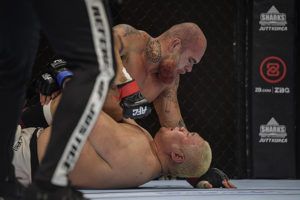 The co-main event was originally a featherweight title bout between champion Moon Gi-Bum and Lee Do-Gyeom but the challenger missed weight by 4kg and, as a result, the fight was changed to a non-title three rounder.

Many pundits in Korea felt this would be Moon’s toughest test yet but he proved them wrong with a knockout win. Both fighters simultaneously launched overhand rights in the opening round but the champion’s punch was a split second quicker.

It was enough to finish the fight and ensure Moon (10-4) remains the featherweight champion, even if his title wasn’t on the line. Lim drops to 6-3 while the winner announced his intention to sign for a major international promotion like the UFC.

The organization announced that AFC 12: ‘Hero Of The Belt’ will happen on June 10th in Seoul with Choi Hong-Man likely to headline the event.