Giacomo Lemos flew all the way from Brazil to spoil the party by defeating hometown favorite Lee Sang-Soo to take the vacant openweight title in the headliner of AFC 10 in Seoul.

In previous fights, the undefeated Lemos would charge forwards from the opening bell and throw caution to the wind with phenomenal results but that was not the case this time around. Since it was his first title fight, he plotted a previously unseen strategy to take out the much more experienced Lee.

The Brazilian held a low stance and worked kicks while mixing in single punches. This actually worked in favor of Lee, in that he was able to draw first blood with an overhand right. A cut on the left side of the forehead opened up and started leaking badly as the fight continued but the doctor was able to clean it up.

The taste of his own blood seemed to motivate Lemos. Lee had been winning the round until he connected with a right hand that had the South Korean on queer street. He rushed in with a barrage of hooks and uppercuts that got through the guard of Lee while the fence held him up.

For the last minute of the opening round, Lemos punished Lee in the clinch along the cage with shots to liver and knees to the midsection. It was just incredible to see how Lee was able to hold on and take that amount of damage to the body.

In round two Lee walked backward while Lemos landed wild, powerful punches as well as devastating knees. The crowd was mostly silent during the onslaught except for a few random outbursts encouraging the South Korean to press forward and fight on.

No amount of morale-boosting could have got Lee out of the beating he was taking and eventually he quit on the stool at the end of the round. The announcer stated that he had injured a finger during one of the exchanges and could not continue.

Giacomo Lemos (5-0) earns his first MMA title by taking out Lee Sang-Soo (18-13-1) for the AFC openweight title. He flew all the way across the world for the first time, was tested by a true veteran and passed with flying colors. After the referee called the fight, Lemos was ecstatic and somewhat emotional about his accomplishment.

In other action on the night, former URCC featherweight champion Lee Do-Gyoem (6-2) got back in the win column by steamrolling JMMA journeyman Fumiya Sasaki (10-17-2) in the first round. Lee was promised a title shot versus Moon Gi-Bum and that looks to be targeted for the next AFC event.

In addition, bantamweight Seo Jin-Soo (5-2) and welterweight Sasha Palatnikov (3-1) solidified their status as the top contenders in their respective weight divisions by picking up pivotal wins. 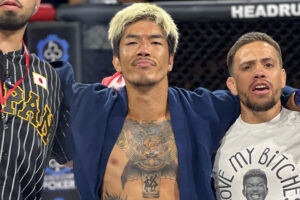