Buakaw Banchamek’s two previous exhibition kickboxing matches at Rajadamnern Stadium ended in brutal knockouts with the Thai fighter getting his hand raised. But Oleksandr Yefimenko was able to go the distance with the Thai meaning that no winner was declared at the end of the third round.

Yefimenko has more experience as an amateur than a professional. But he looked significantly bigger than Buakaw and swept the Thai fighter off his feet at the start of the fight.

The Ukrainian was looking to land punches but Buakaw soaked them all up. He did score with some low kicks attacking both the front and back legs of the Thai fighter.

Buakaw came out more aggressively at the start of the second stanza. Yefimenko continued to attack the lower legs with kicks and he caught a body kick from the Thai and threw him down again.

Yefimenko got warned after catching another kick before Buakaw did exactly the same thing, dumping the Ukrainian on his backside. The Thai looked tired heading into the final round having been unable to finish the fight as quickly as he might have wanted or expected.

He ate more low kicks at the start of the third round. A spinning back fist from Yefimenko missed and his elbow came very close to connecting which he apologized profusely for.

They both missed with high kicks towards the end of the round. The bell sounded to end the fight signifying that there would be no winner with the result not appearing on either man’s record.

Any fans who turned up to the stadium hoping to see Buakaw win with another knockout would have gone home disappointed. But whereas the odds have been stacked in his favour in the previous two exhibition bouts this one was well matched.

Yefimenko gave the Thai legend problems with his size and stamina. Buakaw wasn’t able to find a home for his trademark body kicks and his legs took a lot of punishment from the lanky Croatian.

Earlier in the evening Petchmorrakot Petchyindee returned to Rajadamnern after a long spell fighting for ONE Championship. Competing at 154lbs he looked a little out of shape but still had far too much for Reza Ahmadnezhad. 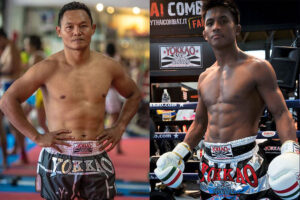