Bozhena Antoniyar is from Loikaw. But the Burmese atomweight is a long way from home and there is no prospect of her being able to return at present.

Antoniyar fights for ONE Championship and trains at Bali MMA. The 24 year old is currently stuck in Indonesia and says it is tough to be separated from her family,

“As you know, the pandemic is terrible and I wish to be with my family. My parents are worried about me so much,” she says.

Antoniyar was in Bali preparing for a bout. She had expected to compete this month but there is currently no prospect of her being able to fight or return home,

“I was hoping for the match in April, but it was postponed. Now, I can’t return to Myanmar. I don’t know when to expect the next match.” While her immediate future is clouded in uncertainty there is one thing that Antoniyar can do. She plans to make the most of her time stuck in Bali by training and improving,

“I am training as much as possible. I will try to be ready and at my best for when I get the chance to step into the circle again.”

Her signature win was against Bi Nguyen. Antoniyar utilized her boxing skills to earn a split decision win over the King of the Cage veteran at ONE: ‘Masters of Destiny’.

Next up the Burmese fighter would like to face a Malaysian,

“I think it would be a good match if I could compete against Jihin Radzuan but there are also other good rivals,” she said. Antoniyar might come from a boxing background but she has learned some valuable lessons in Bali. The improvement in her ground game has been so dramatic that she believes Radzuan might be outmatched in this area,

“I think she has soft points in her ground techniques. That is why I have learned more groundwork than stand-up. I’m okay with grappling in sparring and training, but, as you know, the match is different.”

With no way of knowing when the coronavirus, or Covid-19, crisis will end motivation is an issue for many people. But having her sights set on a specific rival gives Antoniyar something to train for.

She believes that sooner or later the fight will happen and is determined to be in top condition when it does,

“Jihin is an excellent rival but I will train to be in peak form!” 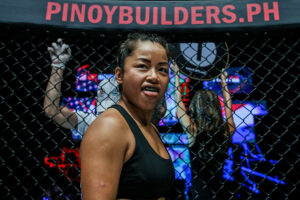