Aoriqileng will use his heart and his brain at UFC 261

Aoriqileng is set to compete at UFC 261 this weekend. It is a big card for a fighter making his promotional debut to be handed a spot on but matchmakers have had their eye on the Chinese bantamweight for some time.

‘The Mongolian Murderer’ was invited to train at the UFC Performance Institute in Shanghai and says the coaches there have totally transformed his game,

“I was a brawler before I trained at the PI, I fought with my heart. Since I joined the PI, I learned how to fight with both my heart and my brain.”

According to Aoriqileng he received recognition for being the ‘most improved’ fighter in the entire facility,

“Since I was selected to train at the UFC PI Shanghai, I have improved a lot. I was also honored as the ‘Most Improved Fighter’ at the UFC PI. I also won two fights while I was training there. I think the coach and team at the PI noted my improvement, so in 2021, I received a contract from the UFC.” 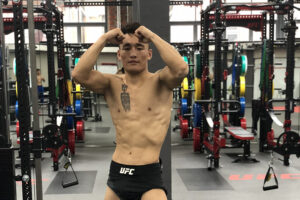 His record currently stands at 18-6 so he does not lack for competitive experience. Those bouts all took place in China but two of the six fighters to beat him would go on to sign with the UFC while another is currently on the Bellator roster.

As the WLF bantamweight champion he is no stranger to five rounders and describes the win over Amirlan Amirov as the toughest night of his career,

“The hardest fight for me so far was when I defended my title for the WLF bantamweight championship in 2019. My opponent was a Russian fighter, who was a 145er and had just cut down to 135 for the belt. So he was too big for me, very strong. We fought five rounds, I won by unanimous decision, but it was a very tough fight,” he recalls.

His fight with Jeff Molina this weekend is set for three rounds. He claims to not be giving too much thought to an opponent who is also making his UFC debut,

“I didn’t think about him too much, I will just do my thing in the fight.” 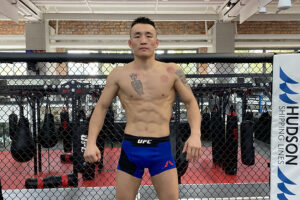 He comes from a striking background and says that remains his style even if the coaches at the UFC Performance Institute have been helping him to hone it,

“I’ve been training in sanda since 2009 and then transferred to MMA in 2013. I am a brawler, or a technical brawler maybe? I don’t know how to define my style, just watch my fight if you want to know.”

A full house is expected at the VyStar Veterans Memorial Arena in Jacksonville for UFC 261. With fans returning to live events after a long absence it promises to be a raucous atmosphere.

Taking on an American opponent, Aoriqileng might not get the best reception from the crowd but he doesn’t sound nervous,

“I feel good. I anticipate a KO win.”

It is a moment the 27 year old has envisaged since he started out in MMA. Aoriqileng is confident of emerging victorious from his maiden assignment in Florida and his ambitions certainly do not end there,

“Being a UFC champion has been my goal since I started my career.”