Under ONE Championship scoring criteria one of the key categories is ‘damage done’. Ok Rae Yoon admitted in an interview with SCMP that he had suffered a broken orbital during his shock decision win over Christian Lee.

If you missed the fight at ONE: ‘Revolution’ then here is a quick recap. Everyone thought Lee won, apart from the three people who were actually judging who all scored the contest for the Korean.

“Christian Lee was on my back and hit me with a light knee. I wasn’t damaged at all or hurt. But as soon as I got hit with that I saw everything foggy. Nothing was clear. I saw two Christian Lees in there,” he told SCMP. 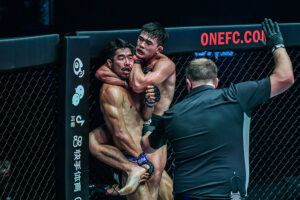 Yon says he has never been hurt as badly in his MMA career,

“I was kind of wondering what this is because in my whole experience as a professional MMA fighter I never hurt my eye. And I never (had) my orbital bone broken, even during training.”

Yon seemed a bit reluctant to pull the trigger and this could well be because he was seeing double,

“I was just focusing on trying to see Christian Lee more clear, that’s why I was touching my eye. But until the end my left eye wasn’t clear. I kept seeing double vision. That’s why I had trouble getting my distance and the biggest trouble was checking Christian Lee’s right hand. I couldn’t see that clearly. That’s why the fight was a bit trickier than I thought, it was all because of the vision.”

Having broken his opponent’s orbital bone in the opening round and been the aggressor for the majority of the fight Lee is wondering what else he needed to do to win. Yon will be out of action for at least another three months but at least he has a shiny new belt to show for his pain.